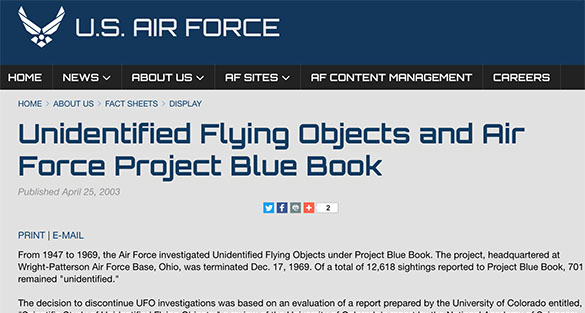 The United States Air Force claims it stopped investigating UFOs in 1969. It is a point they love to repeat when inquiries have been made for the last few decades, even when researchers present government documents to demonstrate otherwise. Often in the past couple of decades, instead of answering my inquiries about UFO documents, I am sent the USAF UFO Fact sheet. However, given recent revelations, the USAF fact sheet was wrong, and, as many have demonstrated, the government has been taking UFOs seriously for a very long time.

According to the USAF UFO Fact Sheet, the USAF program to investigate UFOs, Project Blue Book, was closed because “No UFO reported, investigated and evaluated by the Air Force was ever an indication of threat to our national security.”

In a memo dated October 20, 1969, by Brigadier General Carroll H. Bolender, the reasons for closing Project Blue Book were outlined. In the memo, Bolender noted that “reports of unidentified flying objects which could affect national security are made in accordance with JANAP 146 or Air Force Manual 55-11, and are not part of the Blue Book system.”

His note indicates that the most critical cases were not going to Project Blue Book, which begs the question, “what good is it to investigate UFOs without the best cases?” It also implies there were cases, “which could affect national security.”

JANAP 146 detailed “Communication Instructions for Reporting Vital Intelligence Sightings [aka CIRVIS].” “Unidentified flying objects” were one of the items listed as something to report.

Eventually, the military replaced CIRVIS with Operational Reporting (OPREP). A document distributed by the chairman of the Joint Chiefs of Staff in 1993 says, “OPREP–3 reports containing information relating to unknown objects near U.S. military installations are considered extremely sensitive, and thus not releasable.”

Sure enough, UFO researchers have found several of these documents. They typically address UFOs incursions over weapons storage areas, including those that house nuclear weapons. 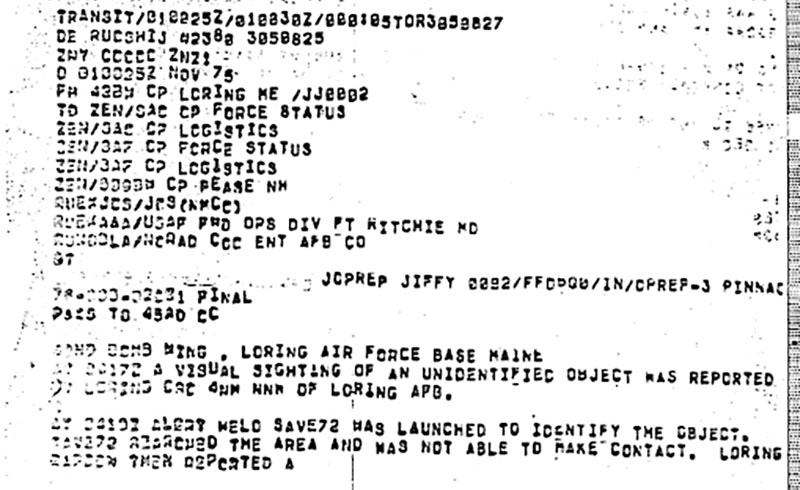 Despite having receipts, UFO researchers are often grouped in with the tin-foil hat crowd. Nick Pope ran the Ministry of Defense (MoD) “UFO desk.” He dealt with these issues from the government side. Pope told the Huffington Post, “We were telling the public we’re not interested, this is all nonsense, but in reality, we were desperately chasing our tails and following this up in great detail.”

“To really achieve our policy of downplaying the UFO phenomenon, we would use a combination of ‘spin and dirty tricks,'” claims Pope. “We used terms like UFO buffs and UFO spotters — terms that mean these people are nut jobs. In other words, we were implying that this is just a very somewhat quaint hobby that people have as opposed to a serious research interest.”

As in many things, it seems the U.S. and U.K. had UFO public relations strategy in common.

I remember the first time I got a good case. It was a security officer who had recently returned from the war in Iraq. He was hypersensitive to his environment and spotted an odd object hovering over a mountain near commercial airliners’ path. He says he tried calling the local airport and the police. No one cared. He finally found the number to a local group collecting UFO reports and got to me. When I called the airport and hounded the FAA on the matter, they didn’t care. They referred me to civilian UFO groups, like the one of which I was a part.

I was shocked and very concerned. It appeared the UFO taboo was causing government agencies to lend a blind-eye to potentially dangerous situations that put the public in harm’s way. What my witness reported may have been someone flying a remote-controlled aircraft near commercial airliners. But the FAA could not be bothered once the word “UFO” was invoked.

It was refreshing to hear Senator Marco Rubio recently express a similar concern.

“The bottom line is if there are things flying over your military bases and you don’t know what they are because they are not yours, and they exhibit, potentially, technologies that you don’t have at your own disposal, that to me is a national security risk and one that we should be looking into,” Rubio told CBS Miami.

The Truth Is Out There.
And @marcorubio wants the answer.
As acting chair of the Senate Intelligence Committee, Rubio is pushing to have the military prepare a public report on “Unidentified Aerial Phenomenon” – better known to the rest of us as UFOs.
cc @CBSMiami pic.twitter.com/KctTUt6STa

Rubio is the chairman of the Senate Select Committee on Intelligence (SSCI). In the proposed Intelligence Authorization Act for 2021 (see verbiage below from the explanatory committee report: pages 11 and 12), the SSCI is asking that the Director of National Intelligence “in conjunction” with the Secretary of Defense put together a report on “unidentified aerial phenomenon [UAP].” The report is to include information from the “Unidentified Aerial Phenomena Task Force.” 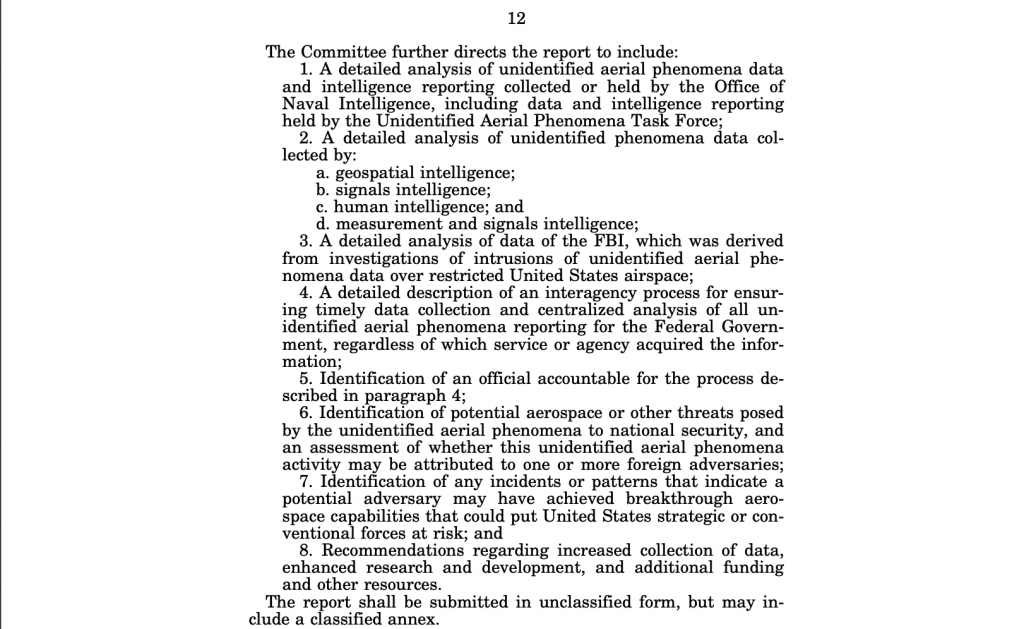 Why would he assume they have this sort of information? Well, the reasons made public stem from the revelations of Luis Elizondo, a former intelligence officer who claims to have headed up a project at the Pentagon investigating UAP. His involvement in the program was featured in an article in The New York Times in late 2017. Elizondo claimed that the program continued even after he had left a few months before the article was published.

Although the Department of Defense (DoD) balked at the claims at first, they have admitted that the program existed and still exists. A DoD spokesperson recently told Swedish UFO researcher Roger Glassel it is an “interagency team.”

One agency included in the SSCI UAP report request is the FBI.

Further, just last night, Elizondo told investigative journalist George Knapp on Coast to Coast AM that he recently discovered an earlier program similar to his. A transcript of the conversation can be read on SilvaRecord.com. Elizondo says that he was recently at a meeting having a classified discussion when one of the men present told him he had done Elizondo’s UAP job in the 80s.

“I wasn’t there to ask him questions,” says Elizondo. “I was there for them to ask me questions, but it was very clear to me that AATIP was not the first of its kind ever. There was an organized effort back in the ’80s to do exactly this as well.”

The question is, how will the various agencies the SSCI is asking to provide information respond? Will they gaslight the SSCI, like they have done with the public at large since 1969?

Chris Mellon, former U.S. Deputy Assistant Secretary of Defense for Intelligence and former Staff Director of the SSCI worked with Elizondo to get credible information regarding Elizondo’s UAP research out to the public. U.S. Navy cases, along with firsthand witnesses, led to the Navy admitting they took UAPs seriously and investigated UAP incidents.

Elizondo and Mellon are co-leads in the History Channel series Unidentified. In the first season of the show, we saw the two take some of the Navy witnesses to Washington D.C. to brief lawmakers. Politico covered some of these briefings. All of this lead to the SSCI UAP report requests.

In a recent interview shared on the Rojas Report, Mellon says they have several never before seen military cases that should help frame the forthcoming reports.

“I think they’re going to add to the impetus and the need for Congress to be asking questions,” says Mellon. “And also begin to underscore the kinds of things or provide more reason to believe that a report of that nature should be able to produce some very interesting findings.”

One such case is from NORAD, says Mellon.

“For example, in season two, we have a NORAD watch officer who tells a story of an event he participated in firsthand, in which NORAD was trying to intercept a UFO,” says Mellon. “This [went] all the way up to the four-star level, and they were scrambling every jet they could get in the air.”

This one should make it into the reports. Although in the OPREP article I referenced above, researcher John Greenewald says NORAD had told him “in the spirit of the FOIA, they looked for UFO information but found no records.”

Now the public knows the trials and tribulations of legitimate UFO researchers. There is a lot of wild speculation on the internet regarding UFOs, including thousands claiming to already be in contact with aliens. Hopefully, mainstream science, media, and academia are beginning to realize some of those concerned that the government has been lying to us about what it knows about UFOs have the receipts to prove it.