Video testimony by an anonymous alleged former CIA official was shown at the Citizen Hearing on Disclosure at the National Press Club in Washington, DC on Friday, May 3.

UFO author and historian Richard Dolan interviewed “Anonymous” on March 5, 2013. Facing impending kidney failure, this individual felt compelled to disclose secret information he feels is too important to keep secret. In the video, he claims to have served in the U.S. Army, worked for the CIA, and worked on the U.S. Air Force’s Project Blue Book–one of the USAF’s official studies of UFOs. And he refers to the project as “partially a fraud.” Asking for clarification, Dolan states, “You’re saying some of the Blue Book cases were completely fictitious?” The anonymous man responds, “Yes.” 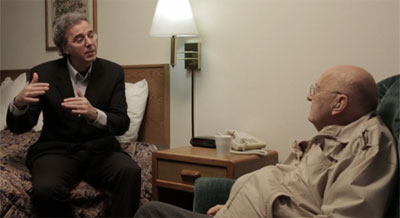 “Anonymous” alleges that, after an invasion threat from President Dwight Eisenhower, he and his superior at the CIA were allowed inside the secretive Area 51 in Nevada to gather intel and report back to the president. There, “Anonymous” describes seeing several alien spacecraft, including the craft that crashed in Roswell, New Mexico. Then, he and his superior were taken to the S-4 facility southwest of Area 51 where they observed live extraterrestrials.

Author and UFO researcher Peter Robbins, who served as a witness at the Citizen Hearing, saw the video testimony as it was presented. He posted his reaction on his Facebook account: “In my opinion, if it can be confirmed by any relevant supporting documentation, this moving and fascinating account does qualify as an authentic ‘death bed’ testimony from an individual who convincingly claims to have been a CIA officer deeply involved in the matter or crashed and/or recovered craft, and at one time a liaison between the Agency and the President (Truman).”

This testimony will be included in an upcoming documentary titled Truth Embargo.