A strange cigar-shaped object was recorded on video hovering over the mid-eastern Wisconsin city of Appleton. 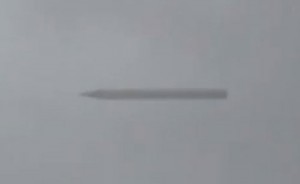 The UFO video was uploaded to YouTube by user UFObook–a self-described “new kind of UFO agency on YouTube” with a goal to “upload real UFO sightings.” Very few details regarding the sighting are provided. The description with the video simply reads:

This video of a cigar shaped aircraft in the rain was recorded north of Appleton WI. It hovers on one spot and turns slowly. The author of this video discovered it when he was looking out of his window. He got his camera with video function to capture it.

This cigar-shaped UFO is long and thin, tapering to a point at one end, which would make it more of a Belicoso cigar-shaped UFO. Like the description states, this strange object hovers motionless in the sky. It then slowly rotates on its axis, turning away from the camera, and disappears into the clouds.

The International Business Times points out that this cigar-shaped UFO video “has drawn mixed comments from YouTube viewers with some of them calling it a government conspiracy and others dismissing it as a work of video editing.” Some believe the UFO is a blimp or a solar balloon. But the object’s appearance and behavior in the video don’t exactly match those of a blimp or a solar balloon.

The witness recording the video doesn’t emote during the sighting, except for an unpleasant cough and some unintelligible mumbles. And some who have watched the video wonder why the witness did not zoom in on the object as it turned and started leaving.

Watch the video and let us know what you think about the UFO. Share your thoughts in the comments below, or on our Facebook page.