Home / Articles / Canadian Government’s UFO Website
...at one point there was a joint effort to collect reports and send them to North American Aerospace Command (NORAD) headquarters in Colorado. 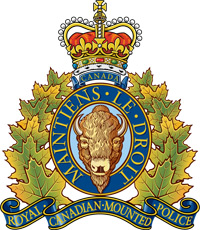 Our neighbor to the north’s UFO interests have paralleled those here in the United States, and at one point there was a joint effort to collect reports and send them to North American Aerospace Command (NORAD) headquarters in Colorado. Canada’s official UFO research history can be found on an interactive website administered by the Canadian government’s Library and Archives.

The beginning of Canadian UFO interest is documented in a memo on their website, it states that “sightings of unidentified objects have been recorded in the Canadian Press since the turn of the Century.” It goes on to explain that their military really had not taken the matter seriously until 1947 when the Royal Canadian Mounted Police (RCMP) and the Department of National Defence began taking reports. It wasn’t until 1952 that an organized effort to review these reports was established.

Project Second Story, sponsored by the Defence Research Board of Canada held its first meeting on April 22nd, 1952. Members from several government agencies made up this board, whose mission was to “collect, catalogue and correlate data from UFO sighting reports.”  In the minutes of their first meeting, the U.S. Air Force’s efforts were brought up. They were briefed that the U.S. Air Force had a project, which as far as the public was concerned, was “discontinued”, however the project was re-opened as classified. Although the memo does not specify, it must have been referring to the closure of the U.S. Air Force’s Project Grudge, and the opening of Project Blue Book. There were public facing as well as classified portions of Project Blue Book. 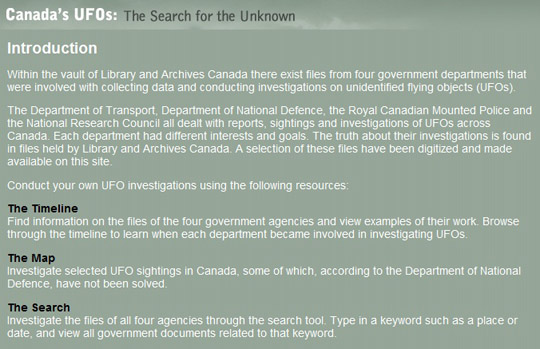 Canada's UFO wesbite. (Click the image to go to the site.)

The meeting also included presentations on the possible origins of UFOs. The extraterrestrial possibility was presented by Wilbert Smith, a senior engineer with the Department of Transportation. Smith was also the head of Project Magnet, a study that started in 1950 focused on potentially using the earth’s magnetic field as a method of propulsion. Smith believed that if they are real, UFOs must be using this type of technology, he stated “the correlation between our basic theory and the available information on saucers checks too closely to be mere coincidence.”  Project Magnet lost its government funding in 1954, but Smith continued the project using his own funds until his death in 1962.

Evidence that UFOs are not technological devices was also presented, a representative of the A.V. Roe Company participated in the discussion speculating that UFOs may be secret airplane designs of the Russians. A.V. Roe Company, later to be known as AVRO, is famous for being one of the first airplane manufacturers, and later testing saucer shaped aircraft. 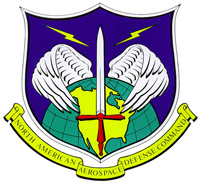 The Russian’s successful launch of the Sputnik satellite, in 1957, raised alarms in the west. Soon after, NORAD was established so that the U.S. and Canada could jointly monitor North American air space. NORAD headquarters were house under Cheyenne Mountain in Colorado. With fifteen buildings inside the complex, it has been likened to an underground city.  Canada’s headquarters were also underground at the Royal Canadian Air Force (RCAG) Station North Bay in Ontario. The entire three story installation was buried 600 feet below the surface for protection.

According to a poster released on the Canadian UFO website, Russian technology was not the only thing NORAD was looking out for. The poster outlines the importance of reporting “immediately all airborne and waterborne objects which appear to be hostile, are unidentified or are acting suspiciously.”  The poster includes images representing the types of objects to be reported, including an image of a jet and a saucer flying in the clouds, labeled “Unidentified Flying Objects or unidentified objects in the water.”

Section of poster showing what to report. (Click on the image to see the entire poster.)

Canada’s UFO interests continued into the 60’s. In a letter from 1967 to the National Research Council regarding the transferring of UFO files from the Department of National Defence, the status of the findings was noted. They found many sighting to be fireballs and meteorites, these cases were sent to the National Research Council Meteorite Centre for scientific study, the others were either regarded as unimportant or investigated by a military officer. The memo notes that they agreed with their U.S. counterparts that none of their research demonstrated a threat to National Security. However, they did find that some of the cases “suggest the possibility of UFOs exhibiting some unique scientific information or technical research.”

More information can be found at their website on this period of time for Canadian UFO research, including some of the more incredible cases that helped fuel official interest.