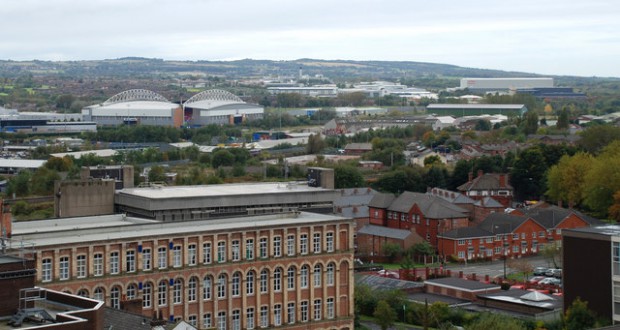 Great Britain witnesses at Wigan reported watching two lights that dropped out of the sky and appeared to be scanning the ground around their home on two consecutive nights, according to testimony in Case 59507 from the Mutual UFO Network (MUFON) witness reporting database.

The lights were first seen about 2:15 a.m. on August 27, 2014, and they returned about the same time on August 28. The reporting witness was outside in her garden looking at the stars when the event began.

“I noticed how starry the night was,” the witness stated. “This was unusual because the sky is usually foggy looking/overcast and to my left – northwest – I saw what looked like an orange star. I didn’t think much of it and went in.”

About an hour later, the motion sensor of the witnesses’ CCTV system in the back garden came on and she stepped outside to investigate.

“I saw two lights that looked to me at first like glowing eyes. They were high up in the sky and swooped fast into the garden. The lights then looked dim. The movement of these was strange. It seemed as though they were scanning around the garden and then would shoot off again and return.”

“The direction path wasn’t the same coming from different directions, but always coming back over the garden and this sort of scanning movement. Throughout the activity the motion sensor of the cameras was on constantly and it went on for nearly two hours and then moved further back to another house and the same movement again. I’ve never seen anything like this and it really freaked me out. My son also witnessed it.”

The lights returned the following night at about the same time, but now in front of the home.

“The weather was bad on this night, raining heavily and very windy and the movement of it was more erratic. My son’s bedroom window was open near where this was and I ran to close it and these lights seemed to zero in then on the window, repeatedly backing up and launching at the window I’d just closed. I really thought this thing was trying to get in. On this occasion all the family witnessed it and we were all freaked out. Couldn’t understand what it was, but scared.”

The object again seemed like it was scanning the area.

“On this night it stayed for about an hour, flicking around the garden, cars, flying off and then coming back. My son opened a window but we couldn’t see anything with the naked eye, only the CCTV with infrared picked this activity up. Again the motion sensor of the cameras remained on constantly while this was around, returning to normal when it left.”

MUFON International is investigating. The above quotes were edited for clarity.