Home / Featured / Blue UFO caught on video in the Netherlands

Rijnmond TV News in the Netherlands is reporting on an interesting UFO video captured by a man in the town of Maassluis. The object appears to be a large lens-shaped blue object and has no apparent means of propulsion.

Maassluis is a few miles south of The Hague, in an area surrounding Rotterdam called the Rijnmond. It is at the mouth of the Rhine River. The UFO video was captured by Maassluis resident Dick Smits at approximately 3 pm last Friday. 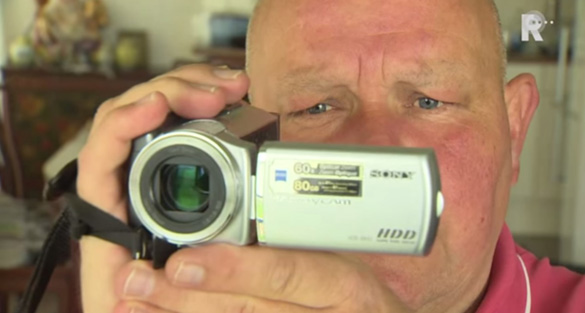 According to Rijnmond TV, the object hung silently in the air for a long time before disappearing in the clouds.

The object has a slightly curved bottom and a domed top. It makes no sudden movement, which could indicate an inflatable object. However, it is at an angle and is not in the shape of a blimp.

The Google translate on the news video is rough, but from what I gather Smits seems to believe the universe is full of extraterrestrial life and that we are in store for more UFO sightings.

If you know Dutch, let us know what else Smits is saying, and let me know if I got that statement right. Otherwise, tell us what you think Smits captured in this interesting video.

Thanks to Podcast UFO for the tip.

Nancy Talbott of BLT Research sent me this translation of the Rijnmond TV interview. She writes:
Because the clip is in Dutch I asked Robbert van den Broeke (http://www.robbertvandenbroeke.nl/home) if he would translate what Mr. Smits was saying.

Essentially, Mr. Smits (whose brother is sitting with him during the interview) is telling a local reporter that he was in his apartment videotaping a boat in the canal below around 3pm on April 11th when he noticed something in the sky which he thought was strange—a blue object which hung motionless in the sky for about 15 minutes, and then disappeared (Mr. Smits does not say how it disappeared in the clip).

When the reporter asks Mr. Smits if he thinks the object could be a UFO, Smits replies that he “doesn’t know what the object is,”  but thinks it is possible that it is a UFO: “yes, when you realize how many other planets there are in the universe, there must be life elsewhere.”

You can read more about Robbert van den Broeke at: www.bltresearch.com/robbert.php.