Are aircraft designers getting extraterrestrial inspiration?

It can often be difficult to determine from where designers receive creative inspiration. But one simply has to look at some of the published aircraft design concepts to wonder if the designers found inspiration from an extraterrestrial source. 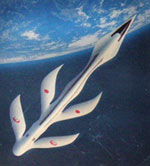 Luigi Colani, a German industrial designer, creates designs that are very organic in appearance (or “biodynamic,” as he calls it). A concept plane Colani designed for Japan Airlines is a wonderful example of his organic style. The long, slender body of the craft resembles a slithering or swimming motion from its well-defined head to its rounded tail. The four wings better resemble fins, or animal wings, than they do mechanical aircraft wings.

The long, narrow, multi-winged design of this airline concept interestingly resembles supposed alien life forms in the sky known as skyfish, or rods. Whether or not Luigi Colani used these creatures as his inspiration for the Japan Airlines concept is unknown, but he has cited “heavenly bodies” as inspiration for his overall “biodynamic” design.

It is interesting that Colani’s unusual airline concept was designed for Japan Airlines, because in 1986, a Japan Airlines flight encountered three UFOs while flying from Paris to Tokyo in the skies above Alaska. Perhaps the airline has developed a fascination, or even a connection, with extraterrestrials, but that, of course, is purely titillating speculation.

The CleanEra project has embarked on a mission to develop a more environmentally sustainable airplane. The project’s “greenliner” concept is, quite simply, a flying saucer.

Now, it is pretty obvious from where the inspiration comes for a flying saucer design (probably the most observed UFO shape during the ’40s and ’50s), but CleanEra is not the first company to use UFOs as inspiration for aircraft design. The United States military has allegedly designed several flying disc-shaped craft, including the Alien Reproduction Vehicle (also known as the ARV or flux liner) that has been detailed by Open Minds’ own Michael Schratt in issue three of Open Minds Magazine.

Another example of flying saucer-inspired design is the GFS 13 unmanned aerial vehicle developed by researchers in England. 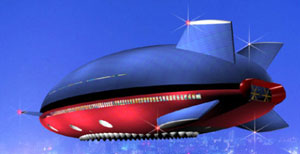 Aeros, the world’s leading lighter-than-air (LTA) aircraft manufacturing company, debuted their Aeroscraft ML866 back in 2007. This “sky yacht” looks like the luxury line of blimps. It also roughly resembles certain depictions of UFOs, like the craft in Close Encounters of the Third Kind, with its horizontal band of windows, additional “ufo-like” porthole windows, and illuminated base.

Some aircraft designs, especially those used by the military, are allegedly taken directly from actual UFOs that have been recovered, and reverse engineering of alien technology has given the military the knowledge to construct and operate these flying saucers. Other interesting aircraft design may or may not have some sort of extraterrestrial connection, but it would be interesting to learn from where some of these designers are getting their inspiration.