Another school uses aliens in curriculum 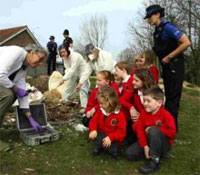 Another school in the UK chose extraterrestrials as the subject of a student creative writing project. Teachers at Weeke Primary School in Winchester, England created a scenario this week where an “alien egg” UFO crashed on school grounds. Students investigated the staged crash site, complete with alien blood and slime, with the help of local police, student scientists from the University of Winchester, and a ufologist from the University of Warwick. Following their investigations, students were encouraged to write news reports for newspapers and television news.

Using the alien/UFO theme for student writing projects is a growing trend around the world. While this trend seems most popular in the UK, the idea was recently implemented in Arizona by Lucy Hawking, daughter of Stephen Hawking.