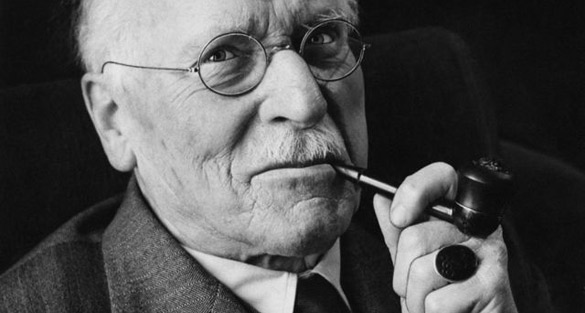 A letter from Carl Jung to an editor at the New Republic newspaper in Washington D.C. about UFOs has recently gone up for auction at the Swann Auction Galleries. The letter, dated December 12, 1957, appears to be in response to a request to write an article about UFOs and Jung’s upcoming book on the topic.

Jung demonstrated a great interest in UFOs in his career, primarily the psychological aspects of the modern mythology, but as he expresses in the letter, to his chagrin, “one almost must regret that the Ufos seem to be real after all.” 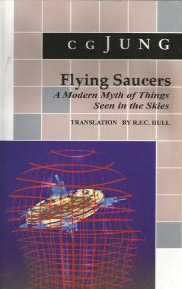 In 1958, Jung wrote a book focused on the psychological aspects of the phenomenon titled, Flying Saucers: A Modern Myth of Things Seen in the Skies. This is the publisher’s description of the book:

Jung’s primary concern in Flying Saucers is not with the reality or unreality of UFOs but with their psychic aspect. Rather than speculate about their possible nature and extraterrestrial origin as alleged spacecraft, he asks what it may signify that these phenomena, whether real or imagined, are seen in such numbers just at a time when humankind is menaced as never before in history. The UFOs represent, in Jung’s phrase, ‘a modern myth.’

It appears to be in anticipation of this book that Mr. Harrison of the New Republic requested Jung to submit an article on UFOs. The letter reads:

“[T]he problem of the Ufos is, as you rightly say, a very fascinating one, but it is as puzzling as it is fascinating; since, in spite of all observations I know of, there is no certainty about their very nature. On the other side, there is an overwhelming material pointing to their legendary or mythological aspect. As a matter of fact the psychological aspect is so impressive, that one almost must regret that the Ufos seem to be real after all. I have followed up the literature as much as possible and it looks to me as if something were seen and even confirmed by radar, but nobody knows exactly what is seen.  In consideration of the psychological aspect of the phenomenon I have written a booklet about it, which is soon to appear. It is also in the process of being translated into English. Unfortunately being occupied with other tasks I am unable to meet your proposition. Being rather old, I have to economize my energies. 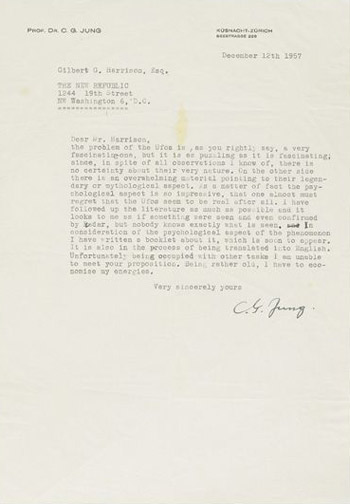 As indicated in the letter, although he was primarily interested in the psychology, Jung had also done extensive research into whether or not the mythology was based on a physical phenomenon. In 1955 he submitted an article to a British UFO magazine called the Flying Saucer Review, in which he stated:

In the course of years, I have gathered together a considerable mass of observations, included in which are reports by two eyewitnesses known to me personally (I have never seen anything!). I have also read on the question. However, I can only say for certain: these things are not a mere rumour: something has been seen.

Although Jung had been involved with investigating UFO reports, the Flying Saucer Review was a somewhat obscure publication. So after Jung’s book was published, because he used the term “mythology” in the title, skeptics purported that he was not advocating that UFOs were real.

In order to remove any doubt, Jung released a report that was picked up by the Associated Press and printed on July 30, 1958, in the New York Herald Tribune. They wrote:

Dr. Carl Jung, Swiss psychologist, says in a report released yesterday that unidentified flying objects are real, and show signs of intelligent guidance by quasi-human pilots. “I can only say for certain that these things are not a mere rumour. Something has been seen. A purely psychological explanation is ruled out”. Dr. Jung, who had started his research on UFOs in 1944, issued his statement through the UFO-Filter Centre of the Aerial Phenomena Research Association (A.P.R.O.) here.

The letter being auctioned off this week perfectly summarizes Jung’s views on UFOs. Swann estimates that the letter will be sold for between $2000 and $3000, so if you are a big Jung and UFO fan, like I am, grab your wallet and start bidding.