A woman used her cell phone to record video of a UFO in England on Sunday, November 24.

The witness saw the aerial object while she waited for a train in the West Yorkshire city of Leeds. The video she recorded with her phone shows an illuminated object demonstrating acrobatic maneuvers in the dark sky. The silent UFO is described as “white in colour with sudden and occasional changes to blue.” 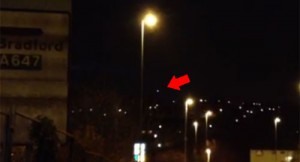 According to the Yorkshire Post, the video was given to former police detective and editor of UFO Truth Magazine Gary Heseltine who has reportedly “ruled out the possibility that the object could be an aircraft, helicopter, microlight, laser or of atmospheric or astronomical origin.” But he believes that further analysis is needed.

Heseltine released the UFO video to the media with the hope of finding other witnesses.

Some have suggested that the object in the video could simply be a moth fluttering near the street lamp. But the recorded UFO behaves more like a remote-controlled airplane adorned with LED lights. Equipping RC aircraft with lights is quite common, and many retailers are now selling these toys pre-customized with LED lights to enable nighttime flying.

Hopefully Heseltine’s efforts will produce additional witnesses who will be able to confirm or rule out an RC aircraft as a possible identification.