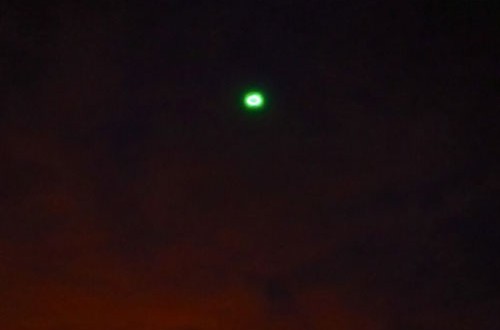 Multiple witnesses saw a UFO hovering over the village of Whiteshill in Gloucestershire, England on the night of Friday, October 4.

Sam Villeneuve saw the UFO at approximately 9:00 p.m. and was able to photograph the strange object. He posted the following message and photo to his Twitter account, bringing it to the attention of the Stroud News and Journal:

A nearby motorist also observed the unidentified aerial object. He described to the Stroud News and Journal, “I spotted a ring of light in the sky. It was like a blue or green ball and it was just sat above the treeline at about 1am in the morning . . . I pulled over in the bus stop near Edge to get some pictures. The object then simply disappeared after a few minutes.” He went on to explain, “I don’t believe in UFOs personally but it was definitely odd. It wasn’t hovering like a helicopter would. It was really strange.”