Two men observed a pair of bright UFOs in the sky above Rome, Italy just before 6:00 p.m. on Saturday, February 8. 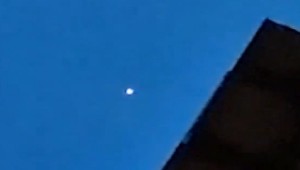 The bright and silent objects were observed by a man who was taking out the trash. He quickly informed his friend about the UFOs, and the two men began recording the objects on video. One of the UFOs on video is shown making sudden stops and irregular movements. The men reported the sightings to the Mediterranean UFO Centre (CUFOM), but only after ruling out other possibilities first. One of the witnesses is described as a “keen observer of the skies,” and he reportedly eliminated mundane identifications like airplanes and Chinese lanterns.

According to Italy news website The Local, CUFOM’s initial analysis concluded that “one of the objects captured by the video was ‘probably a star,’ while investigations into the other ‘unconventional object’ are ongoing.”