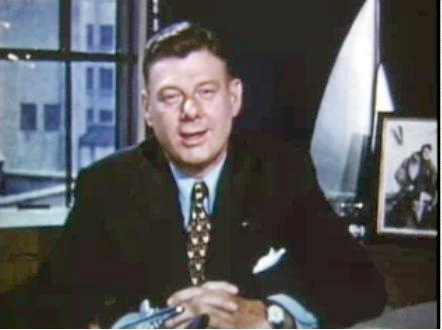 A Pennsylvania witness at Philadelphia recounts a historical encounter with a UFO that he later discovered was also reported by broadcaster-entertainer Arthur Godfrey, according to testimony from Case 61370 from the Mutual UFO Network (MUFON) witness reporting database.

The witness was at home in Philadelphia on June 25, 1965, when the incident occurred. This report is best told completely in the witnesses’ own words.

“At the time I was 11 years old,” the witness stated. “I am a retired Air Force Intelligence Officer (Major), and veteran of the Gulf War. I was sitting looking out a window when I saw a large bright object descending at a fast rate of speed. It was coming down at a 45 percent angle at perhaps 50 mph. I thought it was a rocket because of its shape – a cylinder with rounded ends. 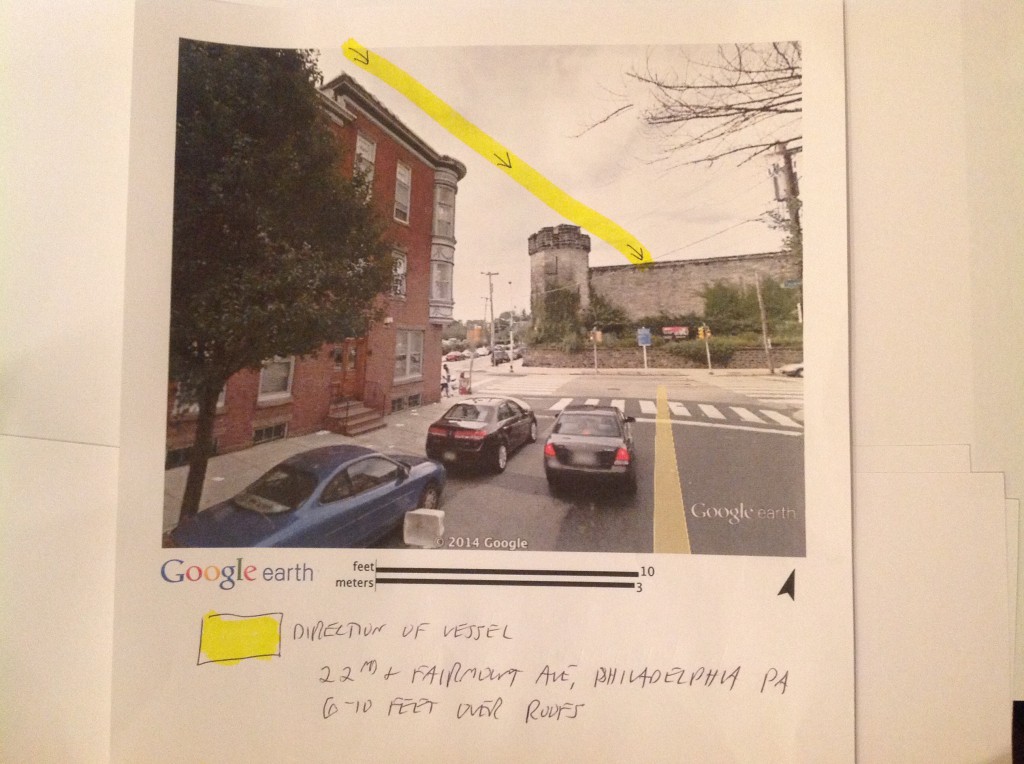 “I ran and hid behind the couch away from the window. I expected an explosion but heard nothing, so I looked out. I saw the UFO hovering a block down the street over roof tops. The UFO had descended at 22nd Street, descending at the intersection of 22nd and Mount Vernon Street, moving north and then stopping at 22nd and Wallace Street.

“I was viewing the object from my Grandmother and Grandfather’s third floor apartment window at 643 North 22nd Street, Philadelphia, PA, on June 25th, 1968. The UFO followed the outline of all the homes and buildings – opposite my side of the street, including a church. 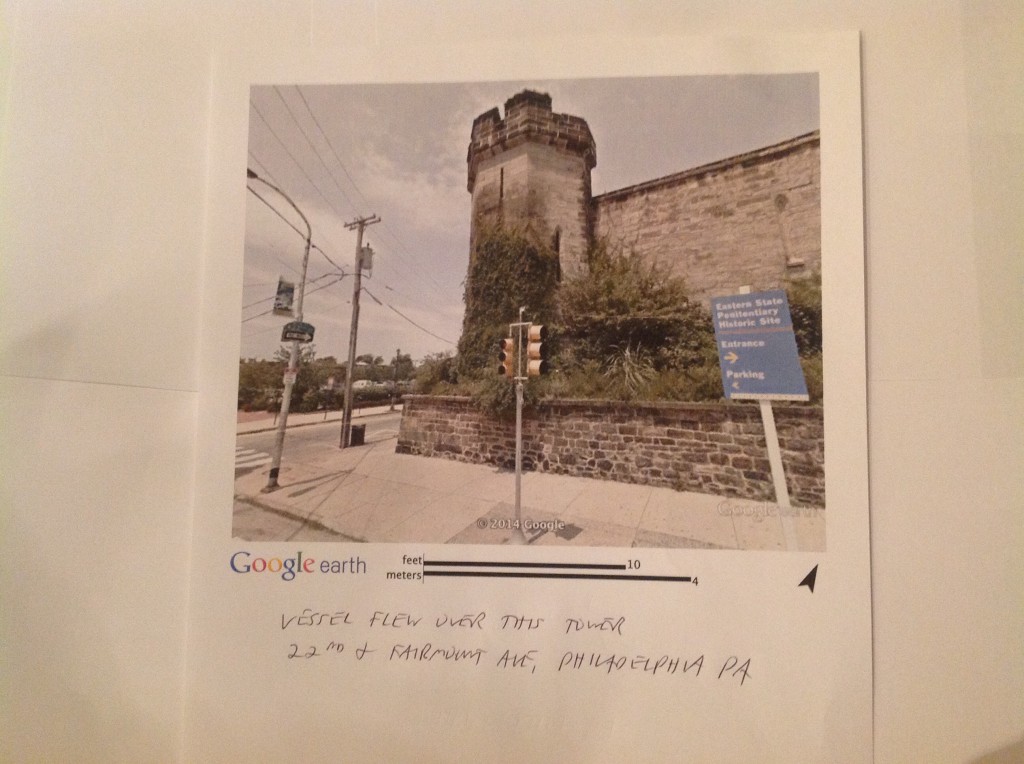 “The UFO was the length of a city bus, with rounded ends, but wider in circumference. It was a large cylinder; it had no markings of any kind, no wings, no visible engines, and no windows. The entire surface was made up of a plasma field, like a close-up image of the sun.

“These gases or ions spun and disappeared under the surface, diving and rising like a gas. The brightness was intense. It was composed of several colors, white, yellow and orange. It reminded me of someone mixing giant cans of paint. It was very beautiful but hard on the eyes because of its brilliance. 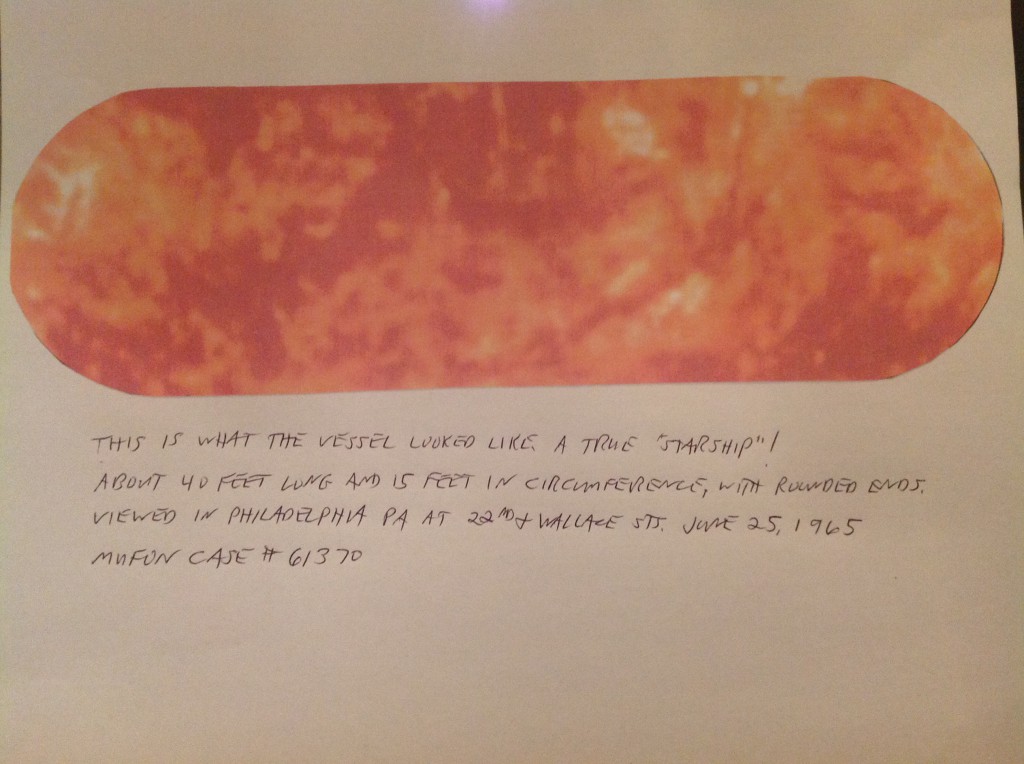 “At one point I turned around looking behind me into the apartment and noticed the patterns of light also produced shadows on my Grandmother’s walls. The patterns it produced on the walls were dark with light edges. The patterns matched the moving patterns of the vessel’s surface.

“The only thing I’ve ever seen similar are close-up films of the sun. In addition to the swirling patterns of light I noticed it was layered in a dimple pattern that covered its entire surface. The dimples appeared to vibrate but stayed in place like those on a basketball while plumes of gas rose and fell like filaments of a magnet. This was truly amazing to see! 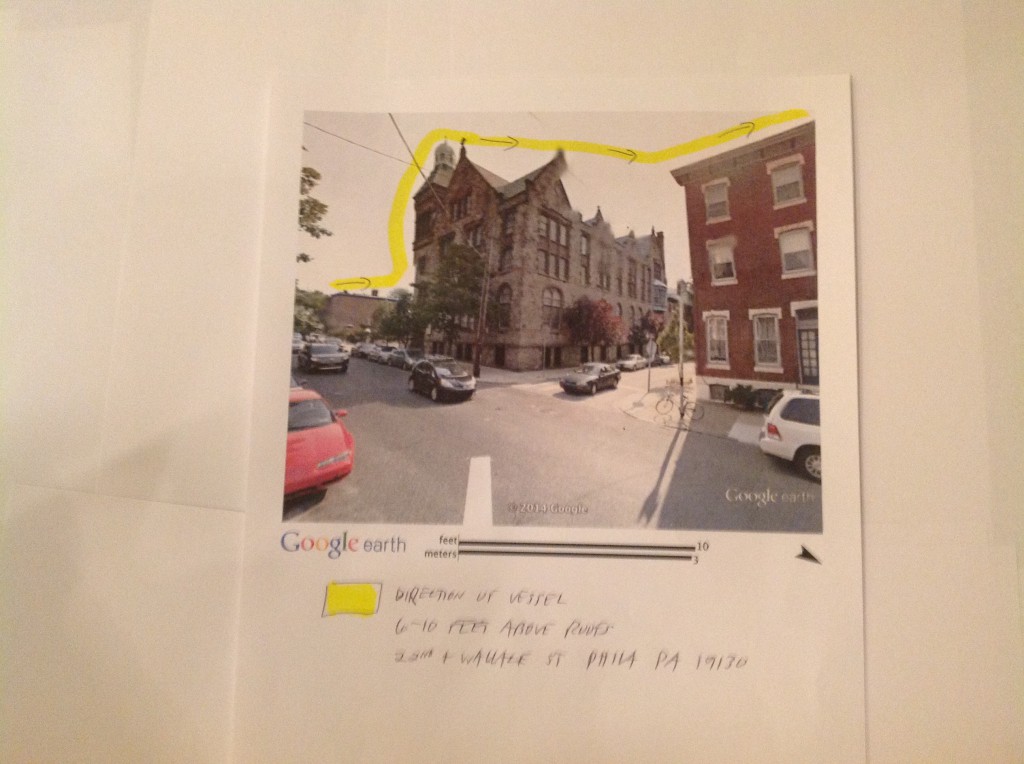 “At times I used my hands to shield my eyes. It was the brightest light I’ve ever seen and today. I’m 60 years old, as of November 2014.

“I was alone viewing the object. My Grandfather was at work and my Grandmother went downstairs to another apartment for a short time. It approached my location, stopping directly in front of me. I did not feel any heat. At this point it was about 80 feet away, close enough to throw a ball to it! I was able to observe this object for perhaps five minutes in total, which seemed then to be a long time.

“As I said it paused several times over apartments, and then would move and stop again several times. Just before the UFO changed direction (descending, or rising, stopping or starting to move forward) it emitted a loud sound. The sound always preceded its change in movement by about two seconds each time. So I knew when it was going to move again.

“The sound reminded me of a loud hiss from an old steam train. I’m not saying there was steam – just that the sound was similar to that or when a large truck makes releasing air brakes. 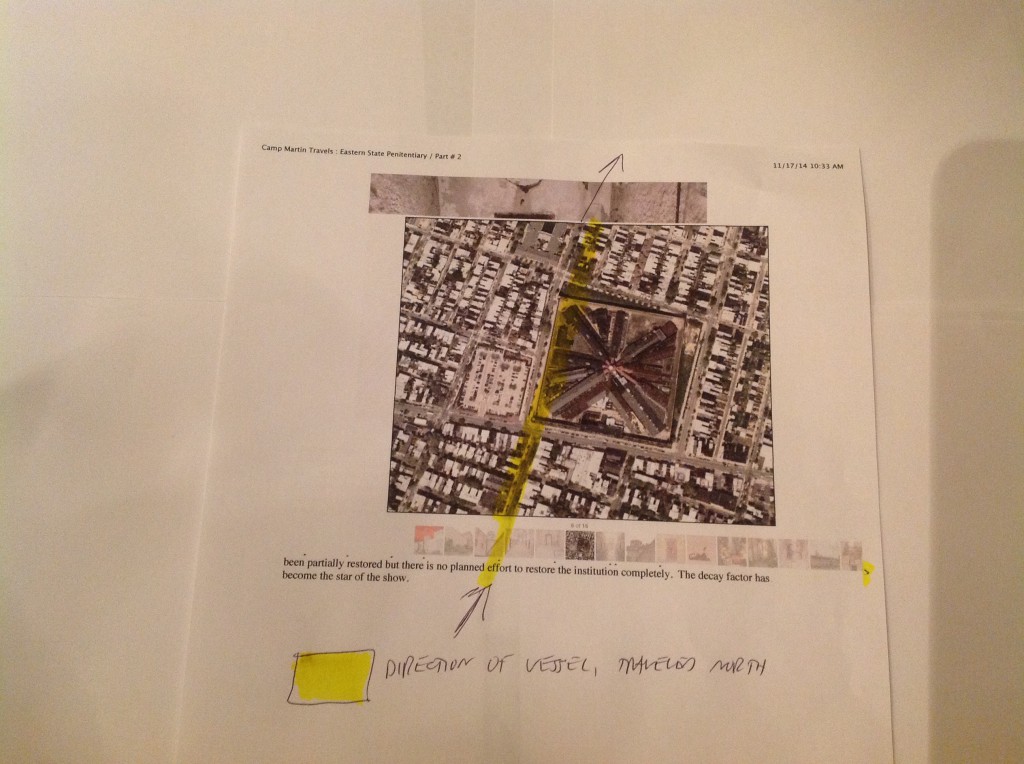 “Once the UFO got to the last building at the intersection of 22nd and Fairmont Streets it angled at 45 degrees, with its front end pointing up, it rose about 50 feet. I ran to another window on the side facing Wallace Street, so was able to watch it again.

“It leveled off, and then flew over the walls of the Eastern State Penitentiary, where it picked up speed at about 35 miles per hour flying north. It continued flying north at a level constant speed until I lost view of it.

“This craft was definitely controlled by an intelligence. When my Grandmother came in I told her what I had witnessed. We were both very religious and she had difficulty believing my story and asked me to swear by placing my hand on the Bible, which I did. 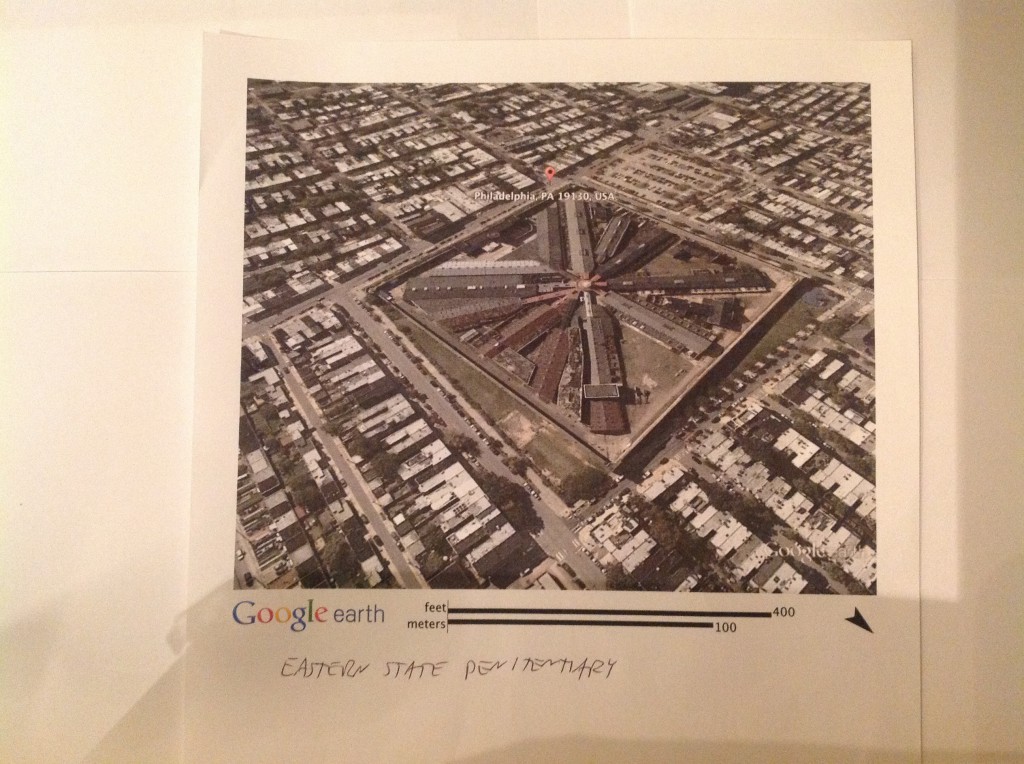 “She was convinced and saddened that she had missed this wonderful sight by just minutes. That evening or perhaps the next night we watched a TV program that highlighted the vessel I had seen and their closer encounter with it.

“The program was “The Arthur Godfrey Show,” or one of his “Specials.” Arthur Godfrey was a respected pilot, and was a colonel in the Air Force Reserve. Arthur Godfrey and Frank Munciello, another experienced pilot, were flying in a small aircraft from New York to Washington DC. Their flight path took them over or near Philadelphia on the same day of my encounter.

“Live on national TV Authur Godfrey described that a brilliantly lit vessel followed and maneuvered around his aircraft. He said it matched his course and speed. He admitted he was scared of the vessel’s close maneuvers until it finally veered off.

“Arthur Godfrey was a well know TV producer and TV host. His TV program was viewed by millions of Americans. My grandparents and I knew he was describing the same vessel I had seen. An account of Arthur Godfrey’s story can be read on Ufodocarchiv.org. 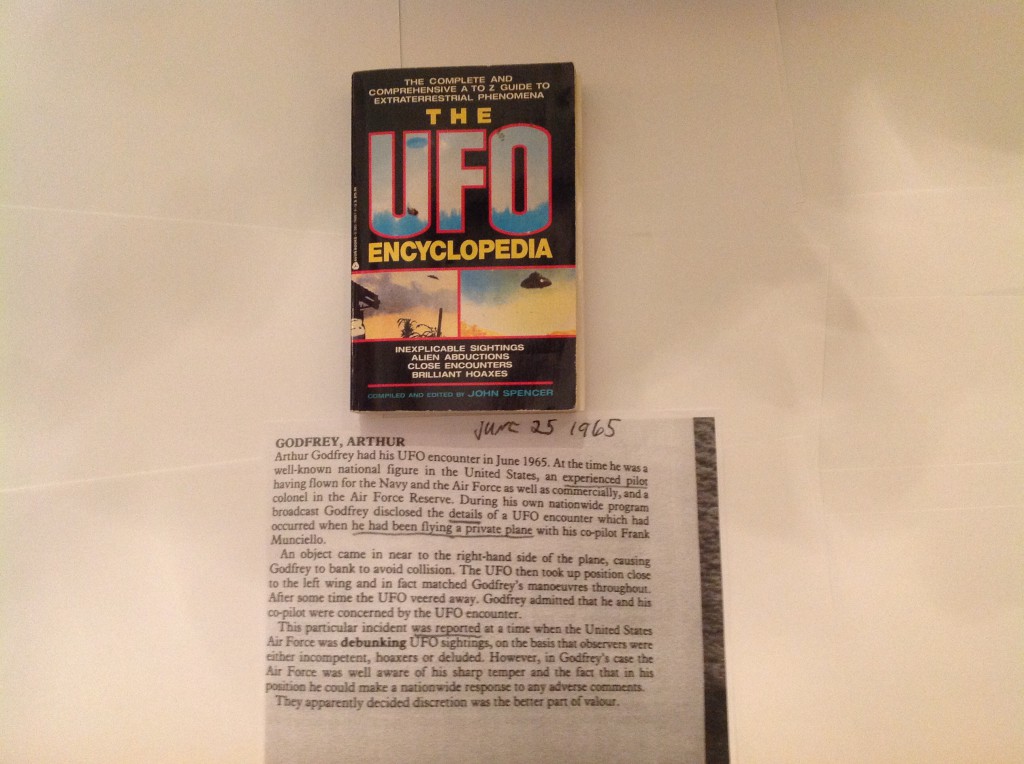 “During one briefing an Aircrew explained to me they encountered a Ball Lightening encounter, also called Saint Elmo’s Fire. A sphere of charged particles entered the airframe of their aircraft while cruising at 40,000 feet. The aircraft was a C-141 Starlifter.

“The sphere, about three feet in diameter, entered the cockpit and then floated inside the aircraft to the cargo bay where it hovered for a time and then vanished. The entire crew witnessed the sphere and actually enjoyed the event. They asked if I knew of any UFO sightings.

“I then told them my story. This upset my Squadron Training Officer who verbally reprimanded me and I was ordered to never speak about UFOs again.”