The twenty-nine-year-old witness, who was visiting from Romania, saw the UFO hovering over the sea on Thursday, July 12 at approximately 8:00 PM. He explains, “I was out walking, when, all of a sudden, I saw something appear in the sky. It disappeared in a matter of a few seconds.” He managed to quickly photograph the object with his cell phone camera, but was unable to determine the identity of the object. The witness describes the UFO as a dark, triangle-shaped object that moved at a high rate of speed. 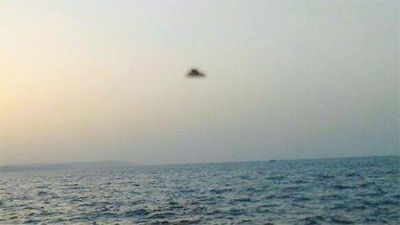 The Times of Malta reports that an elaborate military exercise by the Armed Forces of Malta, which included a helicopter, took place in the same area on that day, but the exercise occurred two hours after the sighting.

No reports of unusual aerial objects were received, and the Malta Air Traffic Services told the Times of Malta, “From an air traffic management perspective, all aircraft flying at that hour were accounted for.”

The witness’s photo of the object is blurry and provides little detail. Judging by the photo alone, the object resembles a seagull in flight. But if the witness’s testimony is accurate, and he did observe the object hovering over the sea before taking off, then the bird theory does not fit this particular situation.

We would love to hear your opinion about this photo. Share your thoughts with us on the Open Minds Facebook page.