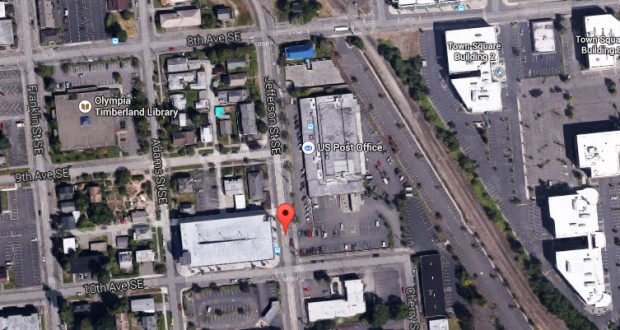 The witness first saw the UFO as he was driving near the post office along Jefferson Street, Olympia, WA, about 11 a.m. on February 23, 2015. (Credit: Google)

A Washington witness at Olympia reported watching a white, hovering, cigar-shaped craft that made sharp turns and fired bright light flashes beginning about 11 a.m. on February 23, 2015, according to testimony in Case 63541 from the Mutual UFO Network (MUFON) witness reporting database.

The witness spotted the hovering object with no wings, tail or rotors that made no sound and had no condensation trail behind it.

“The movement of the cigar-shaped, white object was so slow that it appeared to be simply floating along at perhaps about 30-40 mph,” the witness stated. “There’s a possibility it may have been a drone – I’ve not seen all the types of drones the military has these days, and there is a base nearby, so who knows? It could have been ours, but maybe it wasn’t.”

The witness had just pulled out of a post office parking lot on Jefferson Street and turned right heading north. 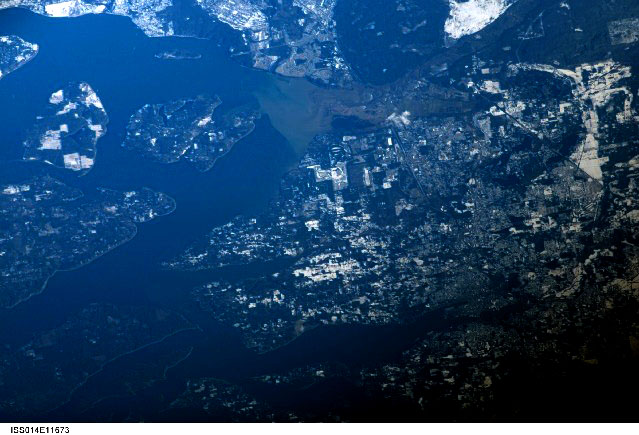 As the object moved away, it appeared to release bright flashes of light. Pictured: Olympia, WA, as seen from the International Space Station. (Credit: Wikimedia Commons)

“After one block Jefferson Street makes a curve to the northwest and as I was looking ahead during the curve – first gorgeous blue sky day we’ve had in a while – a white cylindrical shape in the distant sky caught my attention.”

The witness aid the object did not “look like a normal airplane.”

“It was long, cylindrical, no wings, tail or rotors, no windows as far as I could tell. It was hard to tell how far away it was – I would guess perhaps anywhere from 1.5 to 2 miles away. Elevation (guessing again) may have been ono-half to one mile high. It’s really hard to tell as there was nothing to triangulate it with.”

The witness is a pilot, but has not flown in years. He pulled over to the side of the road for a better look. The witness was able to see the object for about three to five minutes.

“From my viewpoint it was to my west-northwest, and was headed south, maybe a tweak to the southwest, moving very slowly, silently, for about one minute of my watch time, when suddenly it veered sharply to its right – due west – so now all I could see was the dot of its circumference.”

The witness then noticed flashes of light coming from the object.

“The whiteness of the object was getting dimmer as it moved further west, and suddenly I noticed a bright pomegranate-colored flash below it to the south, and then another less brilliant flash a little further away, and then a third even dimmer and further still away. They were like light flashes, nothing exploding, not flares, and were all in a single southern and lower trajectory from the craft.” 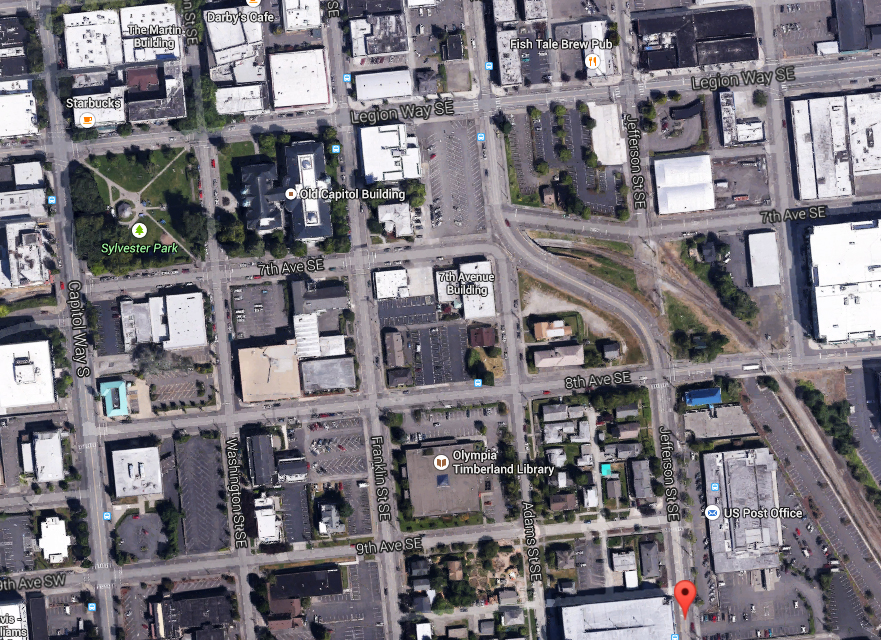 The witness continued to watch the object as he drove along Washington Street where it makes a loop in a northwest direction. (Credit: Google)

Then the craft moved again.

“A few seconds later the craft made an abrupt turn and was longwise to my view again, pointing south. It seemed to just hover there for maybe 10 seconds, and did not proceed further south. Then it abruptly turned west again and within a few seconds there was another brilliant flash off the side of the craft – a brilliant whitish-green, electric colored flash – white on the far side, greener closer to the craft. That flash was fan-shaped, different that the burst of round light previously seen. The fanned-out part of the white-green flash was away from the craft, while the narrow part of the fan-shape was right near the craft.”

The longer the witness watched at this point, the object moved further away until it was out of sight.

Olympia is the capital of the State of Washington and the county seat of Thurston County, population 46,478.