Obama responded to a curious Jayden Smith about the presence of extraterrestrials on Earth. 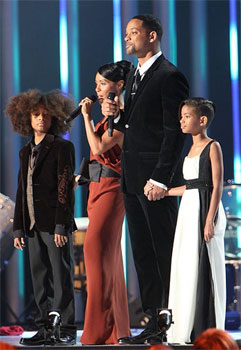 Jaden Smith (Left) with his family in 2009. (Credit: Harrywad/Wikimedia Commons)

Men In Black star Will Smith revealed in an interview with BBC Radio 1 on Wednesday, May 16 that his son Jaden confronted U.S. president Barack Obama about the presence of extraterrestrials on Earth.

During the interview with BBC Radio 1 host Chris Moyles, Smith told a story about his family visiting the White House in April of this year. He explained:

I was at the White House with my family and we were getting a tour and, you know, Barack and Michelle and Sasha and Malia. And it’s me, Jada, and the kids, and we’re walking through the White House. And the night before, Jaden had said to me, “Dad, I got to ask the president about the aliens.” I was like, “Dude, no. It’s not cool. It’s not cool. It’s embarrassing. Do not ask the president!”

But the persistent Jaden was determined to bring up the topic with the President. Smith explained that, upon arriving in the Situation Room, Jaden got “the look in his eyes,” leaned over to his father, and asked, “Dad, What’s my punishment?” Smith again forbade his son from asking the President about aliens, but defiant Jaden had already made up his mind.

And Barack is starting to talk about this situation room and Jaden says, “Excuse me Mr. President?” And I’m like, “Hey, Barack man, listen?” And Barack said, “Don’t tell me.” And in perfect form – and this is why he is the president – he stopped and looked at Jaden and said, “The aliens, right? OK, I can neither confirm nor deny the existence of extraterrestrials, but I can tell you, if there had been a top secret meeting, and if there would have been a discussion about it, it would have taken place in this room.” 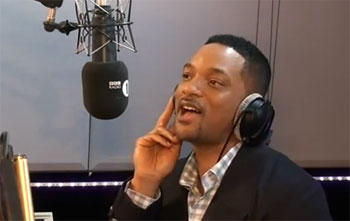 Jaden was apparently thrilled by the President’s response, taking it as confirmation of the existence of extraterrestrials. Moyles suggested to Smith that he should look into the issue of extraterrestrials, but Smith jokingly responded, “I know. I already have the top-secret information. I just can’t share it. You don’t think that I’ve made all of these movies and not been briefed by the White House?”

Some are taking the President’s response as evidence of the government’s UFO cover-up, though it is likely his response (which really doesn’t offer anything but a simple hypothetical situation) to Jaden was simply meant to entertain a 13-year-old and his family.

Regardless of what the President may or may not know about UFOs and extraterrestrials, his recent comments are sure to generate interesting headlines for weeks.