Volcanic glass hints at perfect conditions for life on Mars 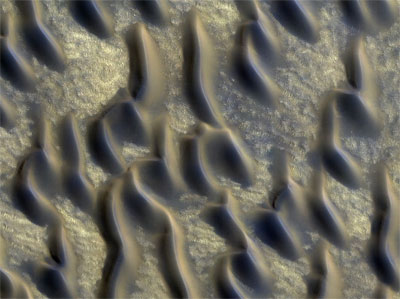 A research team from Arizona State University recently discovered glass sand on Mars that was likely formed by interactions between magma and ice, or water. And according to Space.com, it is interaction like this that could create the perfect environments for microbial life.

The researchers, Briony Horgan and James Bell, used the European Space Agency’s (ESA) Mars Express orbiter to review a region in the planet’s northern hemisphere, where dark sediments have reportedly puzzled scientists. Having identified this as glass sand, Horgan explained that this discovery is important because it is “the first direct evidence on Mars for explosive volcanism on a planetary scale.”

According to Space.com, heat from a volcano eruption beneath a glacier could form large subglacial lakes. Claire Cousins of the University of London explains, “Regions of volcano-ice interactions on Earth provide a wide range of hydrothermal environments that can be exploited by microbial life.” According to Horgan, this environment is “the perfect place for microbes,” because it provides a “nice, warm, safe place for microbes to hang out, with lots of chemicals around to munch on.”

The research was published in the journal Geology.