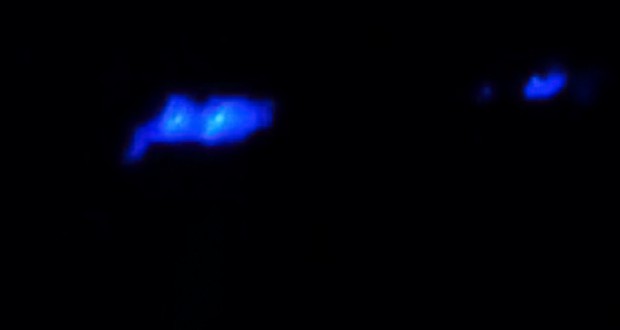 A Virginia witness at Richmond reported watching and photographing a “small, glowing, rod-shaped UFO hovering silently in a neighbor’s tree,” according to testimony in Case 61042 from the Mutual UFO Network (MUFON) witness reporting database.

“I was prompted to notice a small, glowing, weird rod-shaped object hovering approximately 30 feet above the ground in the flimsy, leafy, outer branches of a large tree behind a house in my tranquil, heavily-wooded suburban neighborhood of Stratford Hills in Richmond, Virginia,” the witness stated.

The area is part of the witnesses’ regular walking route. 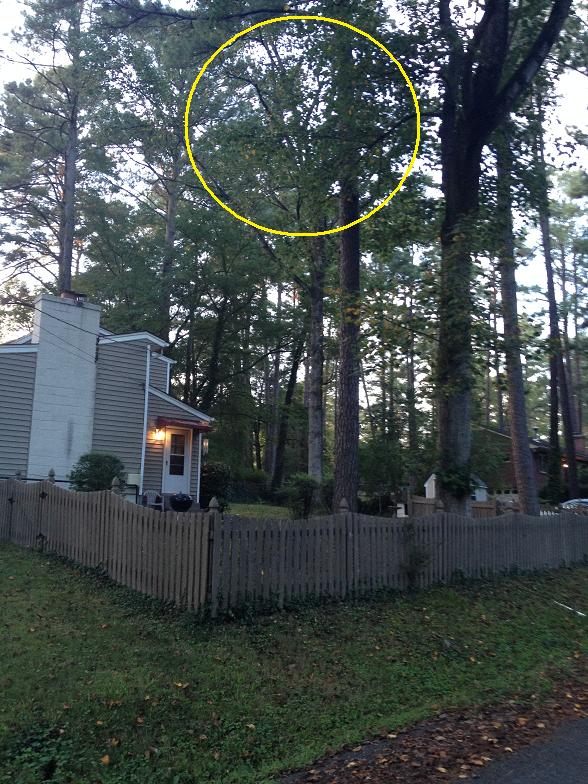 “I’m 54 years old and I’ve been walking this route nearly every day for 10 years and what I beheld at 11:33 p.m. on a very quiet Sunday night was abnormal and totally out-of-place! Most of my neighbors probably were in bed.”

Something odd caught the witnesses’ attention.

“I was fortunate to view the mysterious glowing object that seemed to be hiding up in the tree and I partially attribute my good fortune to the fact that it was a new moon – the darkest night of the month!”

“The silent UFO first was rod-shaped with a glowing blue light on the left end and a pinkish-violet light on the right end. It was hovering horizontally in a place where a human could not be. It was not a new-fangled bug zapper and there are no cable-TV or electric lines running near the tree and definitely not at that height. No logic for the uncanny faintly-glowing lights in the tree.”

The witness used an iPhone 4S with no zoom to shoot video of the object and then switched to shooting still images in order to zoom in. Thirty images were shot over a 10-minute period.

“During this time the small, anomalous, cylindrical UFO/entity morphed into an orb which sometimes appeared cobalt-blue and other times violet with a freaky purplish core. Then it morphed back into a rod that was more white-colored and appeared to be segmented, reminiscent of a bacterial rod under a microscope.”

Upon reviewing the images, the witness cannot identify the object and was later intrigued that the object appeared to emit a sound.

“This flying object ain’t one of ours – NOT a drone, stealth bomber, planet Venus, or swamp gas. I did not hear any sounds coming from the object that night but later when I downloaded the video I was surprised to discover that my iPhone had picked up some intriguing clicking noises and when I showed the video to my neighbor S– she said, ‘It sounds like Morse code.’”

The witness decided not to share what he saw with the neighbor, but did notice that after that night they began leaving a porch light on.

“I did, however, tell one of their male neighbors and B—– agreed with me that maybe his neighbors who live in the house in question saw the object too and it spooked them?”

The witness is still out walking in the same area at night and has not noticed the object again – but did discover other nearby sightings were reported.

“My sighting in Richmond was at 11:33 p.m. on August 24, 2014, and just four hours later at 3:30 a.m. on August 25, 2014, a motorist on I-295 N near the Hopewell exit, which is only 22 miles south of Richmond, was followed up the road by a bright UFO orb that was moving a lot faster than manmade highway traffic. Then the orb targeted another car in the southbound lanes and when the sphere made contact with the other vehicle both the orb and car vanished into thin air! Then the driver of the first car saw the orb reappear, and when it started following their car up the highway again they became ‘terrified,’ put the pedal to the metal, and made a hasty retreat off the next exit in sight. I learned of this at the National UFO Reporting Center (NUFORC). 2.” 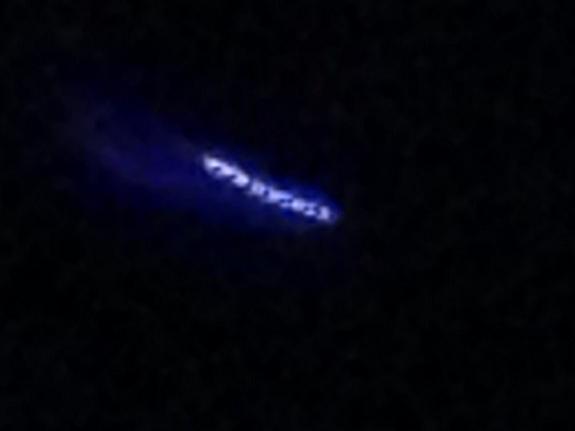 The NUFORC report can be seen here.

The witness also noticed a second nearby event.

“Then a few hours later around 9 a.m. on August 25, 2014 a seasoned colonel in the U.S. Air Force Reserve was killed when his F-15 fighter jet crashed under “mysterious circumstances” in the Blue Ridge Mountains west of Richmond near Deerfield, VA. Coincidentally enough, this was in an area where lots of residents have reported UFOs in the sky and orbs near the ground. They say it took two days to recover the colonel’s body and the official Air Force story was that he was from Massachusetts on a “routine training mission.””

An early story about that crash appears here.

The witness also discovered that a Canadian couple had a similar encounter to his just four days earlier and they posted a YouTube video.

“I’m not going to speculate or draw conclusions, but it seems like an awful lot of weirdness for such a small region in ten hours! Last but not least, a couple of weeks after my ‘close encounter’ in Richmond, Virginia, USA, I was prompted to discover a seemingly-credible YouTube video of a small, blue-pinkish-violet, rod-shaped UFO that a man and woman in Ontario Canada videoed while sitting around a campground fire pit and the anomalous silent hovering object looks uncannily similar to the UFO that I photographed in Richmond, VA, when it was in ‘rod mode.’ The Ontario sighting was on August 20, 2014, only four days before my sighting in Virginia, and the Canadian couple was prompted to upload their video to YouTube on August 24 which synchronistically was the same day as my sighting!”

Virginia MUFON is investigating. Please keep in mind that most UFO sightings can be explained as something natural or man-made. Virginia has a current UFO Alert Rating of 5 with a low number of recent reports nationally. Virginia had 5 UFO reports that occurred during September 2014 – calculated at .61 sightings per million population.

The above quotes were edited for clarity. Please report UFO activity to MUFON.com.