A video shows multiple mysterious flashing balls of light in the sky.

The witness, George Taylor, filmed this event that reportedly took place over Rendlesham Forest in Suffolk, England on the afternoon of Sunday, January 26. The video also shows a military helicopter in flight, seemingly inspecting the UFOs. 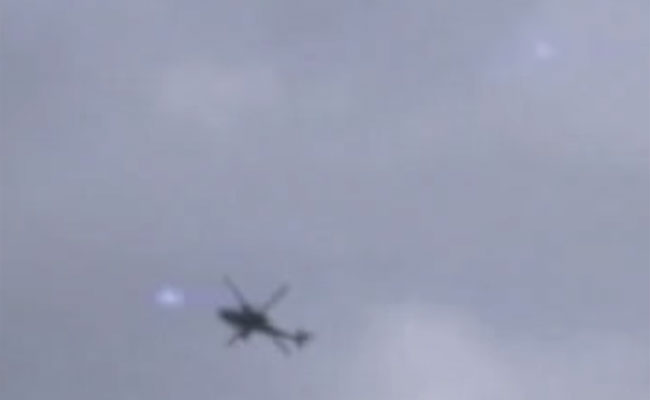 A still image taken from the video, showing a helicopter and multiple balls of light. (Credit: George Taylor/YouTube)

Taylor uploaded his video to YouTube on January 26 with the following description:

Spotted three balls of light in the sky yesterday afternoon (Sunday 25th Jan) whilst walking around Rendlesham Forest and couldn’t believe what I was seeing! Had a very weird feeling that I shouldn’t have been there.

Quickly recorded it on the phone and have uploaded it to see whether anyone else witnessed anything similar yesterday too. Very strange! I know Rendlesham has a long history with UFO sightings but didn’t really believe in it as I haven’t seen anything odd in all the years I’ve lived here until yesterday! Regularly take my dogs for a walk around the area and have never seen anything as strange as this. Anyone have any idea what this may have been?

Rendlesham Forest is, indeed, prominently featured in UFO lore. Much like Roswell, New Mexico, Rendlesham Forest has become synonymous with UFO. It is the location of a major UFO incident that occurred in December of 1980. Military personnel experienced several UFO sightings over a span of a few days. The incident is even referred to by some as Britain’s Roswell.

The strange flashes of light in this recent video are interesting. Odd flashes of light in some purported UFO videos can easily be explained by lens flare or other camera noise. But that is clearly not the case with this particular video. Still, as is the case with all UFO videos, the video’s authenticity should be questioned. And it’s nearly impossible to confirm or invalidate that authenticity.

Nigel Watson, author of the UFO Investigations Manual, suggests one possibility to UK media outlet Metro. He opines, “If I was being cynical I’d say this is a stunt to give publicity for The UFO Rendlesham Incident – a new film being released in February. Like this video, it features helicopters and anomalous lights in the sky.”

Watson’s guess is a good one, based on some of the footage seen in the film’s trailer.

The recent UFO video is the only video on Taylor’s YouTube channel. And the channel was apparently created for this video, as the channel was just created on January 26. This can be an indication of a hoaxed video or a video that is part of some marketing campaign. But that is not always the case. And, based on his responses to comments posted on YouTube, he appears to be genuinely interested in any help determining what he allegedly captured on video.

John Burroughs, one of the military witnesses to the 1980 Rendlesham Forest incident, will appear at the 2015 International UFO Congress to discuss his efforts to declassify documents related to the incident.