A Nevada witness at Henderson reported watching and videotaping a series of six bright lights “hanging in the sky” that eventually disappeared one at a time, according to testimony in Case 59929 from the Mutual UFO Network (MUFON) witness reporting database.

The sighting occurred beginning about 8:42 p.m. on September 18, 2014, and the lights appeared to be over the North Las Vegas area. 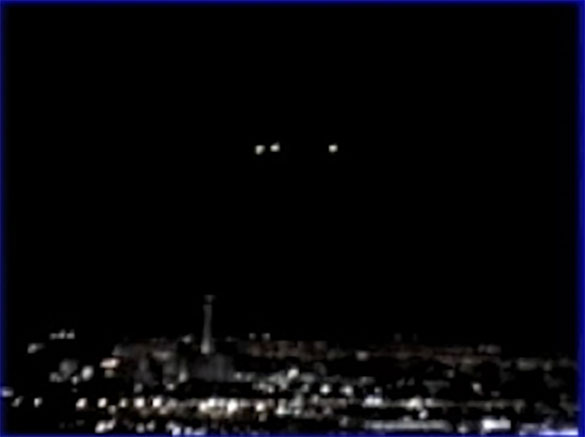 The witness first saw three lights in the sky that disappeared and a short while later more lights appeared to hover in the sky above the Las Vegas Strip. Pictured: Still image cropped and enlarged from the witness video. (Credit: MUFON)

“I actually think this was further north than North Las Vegas, but distance at night is just a guess,” the witness stated.“The lights actually had a slight amber tint to them and you can see the passing aircraft. So we wondered if any aircraft saw the same lights.”

The lights looked like they were stationary in the sky. The witness believes that the camera settings were not correct and the video is a lower quality than expected (video seen above).

“The first sighting was in the northwest (towards Red Rocks), and the lights appeared at approximately the same altitude as the second recording/sighting that is attached. In the first recording there were only three lights. They slowly disappeared one at a time. Then in less than 30 seconds they reappeared in the north. We were in our backyard that overlooks the strip and mountains. We always look at the strip which is approximately 12 miles from our home. In the north-northwest there is not normally any approaching aircraft landing lights. This would be an odd approach for landing aircraft. Both my wife and I used to work for the airlines at McCarran.” 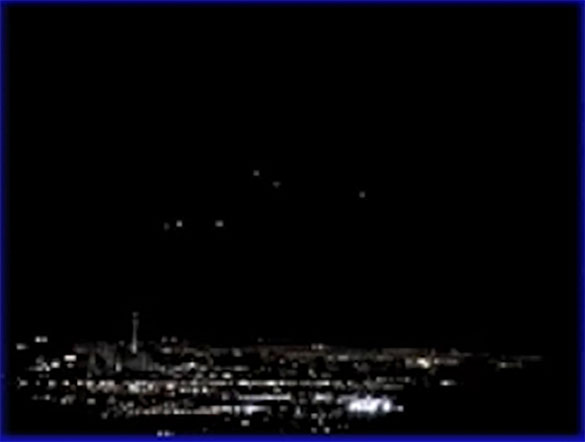 “Slowly they all disappeared one at a time while I was on the phone with 311. Unknown at first, but after observing for several minutes and the lights remained stationary, we felt this was not right. We called 311 to find out if there had been other reports, but was told none had been received.”

The witness reported that the lights were a “strange bright, amber color andaircraft and helicopters appear white in the night sky.”

“The objects appeared round, star-like, twinkling almost, but the twinkling could have been from the atmosphere due to the distance. They were amber in color. They never moved and just appeared and then disappeared. Very interesting and we had a feeling we were witnessing UFOs.” 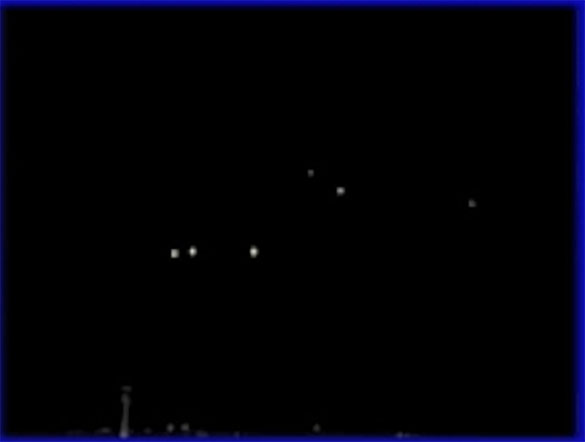 Henderson is a city in Clark County, Nevada, a suburb of Las Vegas, population 270,800.

“The lighted objects appeared to glow and looked solid,” Countiss stated in her report.“They disintegrated from up to six objects to three-to-four during the time of the video and were spherical in shape. The surface was unknown and no exterior features were able to be seen from this distance. True size is unknown, but it glowed yellow-amber colored in the sky, not wavering during the sighting, and no emissions were seen nor sounds heard.  There were other aircraft in the sky at that time. The lowest altitude seemed to be about 500 feet and it was over one mile away. In fact, the strip is 14 miles from the area where they sighted the crafts.  Altitude was estimated to be about 20 degrees above the horizon with a flight path of northwest to north above the lighted strip. No landing or landing site was observed.”