A witness claims that his video shows UFOs landing in a forest in southern France.

The witness, who runs a “UFOs & Disclosure” YouTube channel, uploaded this video on July 5 with the sensational title, “Disturbing UFO activity! 3 UFOs landing in Forest, July 2014.” Three aerial objects are visible, floating above the treeline in the distance. One of the three UFOs illuminates with flashes of light. Then, shortly after, a fourth object to the right of the original three objects also displays flashes of light. 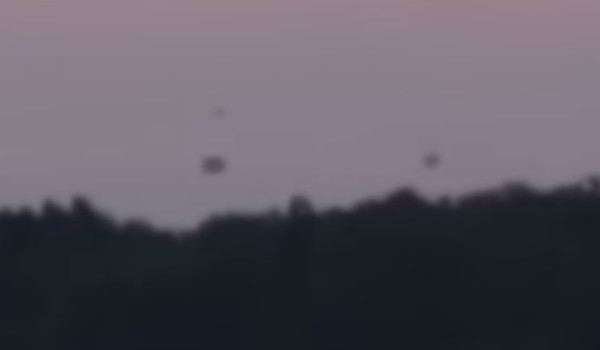 The witness provided the following description with the video:

I filmed four UFOs over a forest in Dordogne, France. It was during a beautiful sunset. I looked between two houses to discover the nice sky, when I saw these objects. I had may Canon 700D in hands, hopefully I could record quickly! I think these objects were there since a long time. This is probably a landing. Indeed, the three objects seem to descend and get behind the trees…

I couldn’t know more about this event, this is a ghost village, only 50 inhabitants in the area. None of them was outside to witness these UFOs with me! I checked on Google map, and the forest in front of me is alone in the middle of huge lands. I don’t see how anyone else could have seen them too.. 🙁

It is unclear why the witness found this incident “disturbing,” especially considering that other videos allegedly filmed by him, like a “Massive UFO Flying Saucer” landing on Earth, and a “Huge UFO Patroller filmed Landing on Mountain,” are much more shocking.

French daily newspaper Sud Ouest reportedly attempted to contacted GEIPAN, a department of the French Space Agency that investigates unidentified aerospace phenomena, to get an opinion on the UFO video. But, apparently, GEIPAN could not be reached for comment.

News website The Local asserts that, so far, “scientists have been unable to come up with an explanation” for the aerial objects in the video.

But the behavior and appearance of these objects is consistent with that of hot air balloons. Although some have commented that hot air balloons “don’t land in the forest,” it is impossible to determine the exact landing location from the witness’s vantage point. And, hot air balloons are actually a common tourist activity in that area of France.

The France Montgolfières Balloon Company operates flights all across the country, flying an average of 7,000 passengers a year. So, although the video could depict something much more mysterious, the likely identification in this case is hot air balloons.