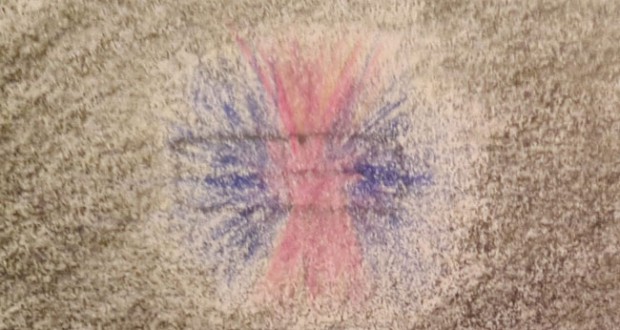 Vermont witness describes multiple UFOs with one object on ground

The reporting witness was in his basement exercising at about 9 p.m. on December 4, 2014, when a bright light was noticed – sending the witness up a flight of stairs to a front porch for a better observation.

“Before noticing any detail I felt an intense sense of dread,” the witness stated. “I looked up toward the sky at a 45-degree angle, directly away from our house, toward Vermont’s highest mountain peak. In the near distance, perhaps a half mile from where I was standing, I saw an extremely bright object, pulsating red and blue lights, bouncing around slightly.”

After briefly watching the object, the witness moved back inside and ran up another set of stairs to alert his wife to the object. The two watched the object together.

“At the same moment I noticed another similar bright object to the north, but this object became a secondary consideration to us because it was partially obscured by tree branches near our window and appeared to be farther away and at a higher altitude.”

The witness then went to retrieve a travel telescope.

“When I returned, I noticed a light on the ground directly below the UFO, in a location that I know to be a patch of cow pasture void of any structures. I quickly found the UFO in my telescope lens. What I saw shocked me down to my core.”

“The object was disc-shaped, bright, colorful, pulsating and bouncing. The pulsating red and blue lights appeared to come from within the craft, passing out through its walls. I then found the light on the ground below the craft and saw that it was cylindrical, orangish-yellow and was illuminating a white angular object which sat closer to my house on the grass.”

The witness then turned his attention back to the object in the sky.

“When my wife again examined the craft, she asked, ‘What is that other thing…in the air, closer to us, in the bottom right corner of the view?’ I looked and saw the corner of another, mostly black and camouflaged object, perhaps two or three hundred yards closer to us. I watched this object for 10 minutes or longer and noticed that it was slowly rocking around and up and down. On several occasions, I could clearly see that the bright, pulsating disc was casting enough light on the angular craft to illuminate two corners of what appeared to be a triangular black craft.” 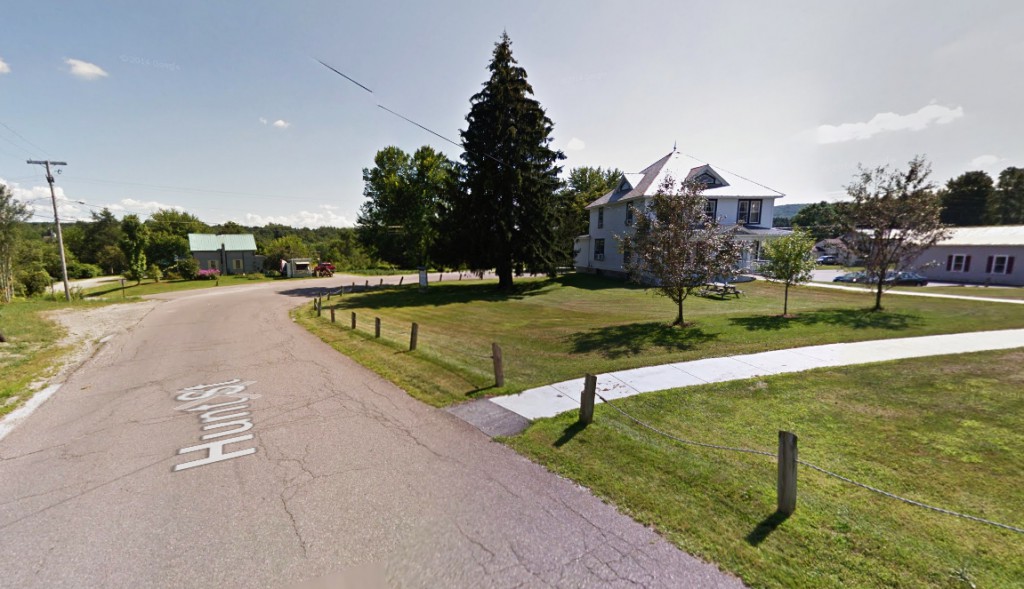 The witness and his wife watched multiple objects beginning about 9 p.m. on December 4, 2014, with one of those objects on the ground. Pictured: Fairfax, VT. (Credit: Google)

The witness then realized that the object on the ground had disappeared.

“Then, I noticed that the pulsating disc was calmer – more stationary and less bright. The red light, especially, was mostly or entirely gone and the craft appeared to settle into a lower-energy state. The triangular craft remained in the same position for another 30 minutes.”

“Immediately prior to going to bed, I saw that the disc and triangle had both changed positions. The disc was now higher, perhaps directly above the triangle, which was now oriented with a single corner pointing downward.

“Suddenly, I saw the full form of the triangle, which was hovering with its underside pointing directly at my window. I saw one faint, circular orange light at each of three corners.”

The next day the witness talked to a neighbor who had witnessed similar activity.

“This individual informed me that she had seen an object that matched my description of the bright object at 9 p.m. on December 3rd and 4th. I knew this meant that the object might return soon, and watched from my window throughout the night of December 5th. Two bright, pulsating objects appeared shortly before midnight, at least one half mile farther from my house than they had been the previous night. I watched for over an hour as they appeared to follow a grid pattern slightly above the tree tops near a river.”

The witness included one illustration with the MUFON report, which was filed on December 6, 2014. 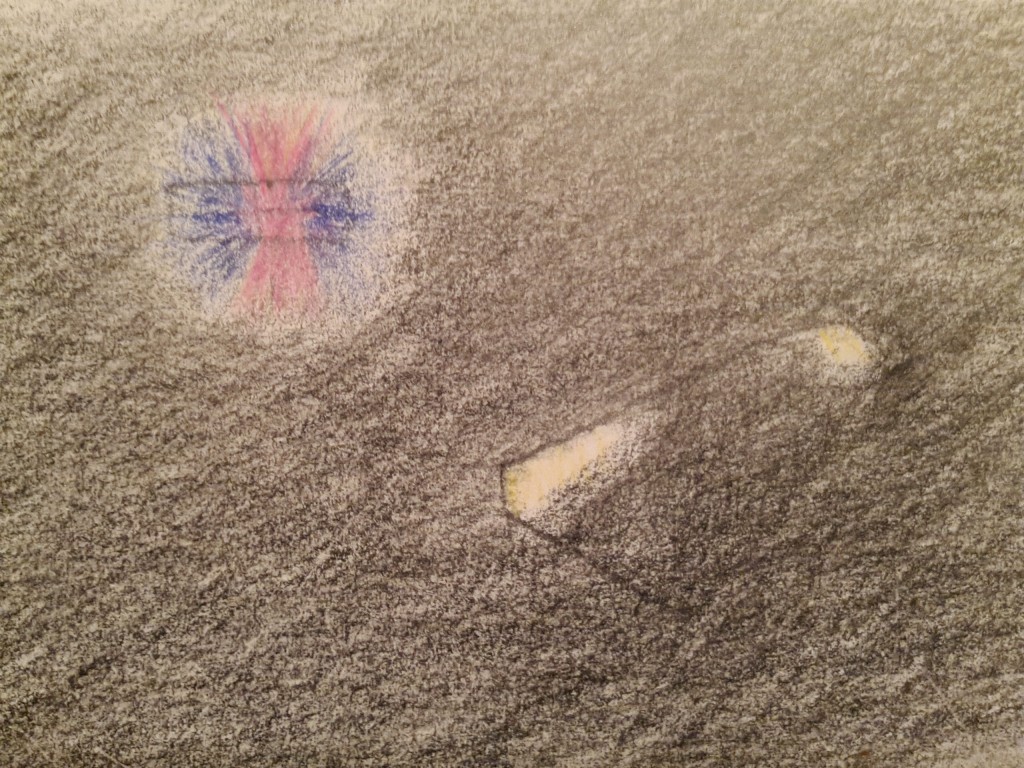 Witness illustration depicting one hovering object and one object on the ground in a nearby field. (Credit: MUFON)

Fairfax is a town in Franklin County, Vermont, population 4,285. Vermont has a current UFO Alert Rating of 5 with a low number of recent reports nationally. Vermont had no UFO reports that occurred during November 2014.