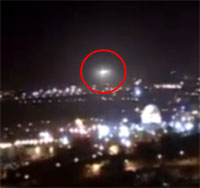 Alleged UFO from one of the Jerusalem videos (credit: Discovery News)

Discovery News feels the Jerusalem UFO video case has been closed. Earlier this year, multiple videos showing a UFO hovering over Jerusalem’s Dome of the Rock received widespread attention from the public and from the media. Describing the footage, Discovery News space producer Ian O’Neill stated, “The footage shows the light drop and seemingly hover just above the shrine. After a few moments, and a brief flash of a strobe, the light took off, disappearing into the night sky.”

Benjamin Radford of Discovery News came to his own conclusion that the videos were “almost certainly a hoax,” based on his experience investigating UFO images. But his decision to deem the cased closed came after findings were released by “one of the oldest, largest, and most respected UFO investigation organizations in the world.” Just days ago, the Mutual UFO Network (MUFON) released a statement with their findings regarding the Jerusalem UFO video case. MUFON’s chief Photo and Video Analyst, Marc D’Antonio, stated “I firmly believe that the UFO was not real, for many reasons . . . this video and the other Jerusalem UFO Videos are in my opinion hoaxes.”

This case has been highly controversial since the first video emerged in January 2011, and is likely to remain so.