This article will highlight three specific programs which were test flown in the 1980’s, 1990’s, and one which is still ongoing today.

Recent disclosures by retired engineers (reported in the Seattle Times on March 27th 2010), have shed new light on the operations at Area 51. During a meeting held at the Atomic Testing Museum in Las Vegas on October 7th-8th 2009, former Area 51 workers provided general details on how they were contracted by the CIA to work at the secret base during the 1960’s and 1970’s. However, operations of classified aerospace prototypes directly involved with protecting the national security of the United States are still ongoing at the remote test site today. Therefore, engineers such as those mentioned above, may not have been “read into” the programs highlighted in the article below, since they were test flown after these engineers left employment at the base. As a general rule of thumb, within the military industrial complex, once you retire from a particular program or facility, you no longer have a “need to know” regarding the specific details of the program. This article will highlight three specific programs which were test flown in the 1980’s, 1990’s, and one which is still ongoing today. 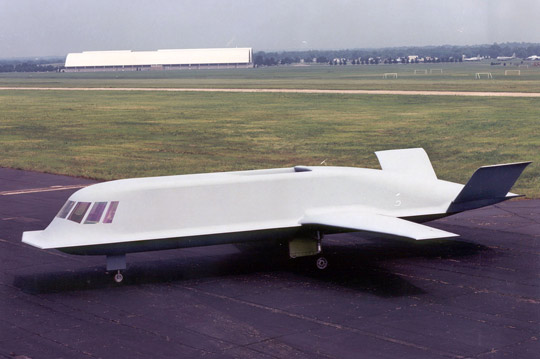 The Northrop “Tacit Blue” was a technology demonstrator which featured a quadruple-redundant fly-by-wire flight control system, and a side scanning radar. First flight of this low observable aircraft took place in 1982. Originally conceived in 1978 under the Carter administration, the test flight program for “Tacit Blue” was run out of AFFTC Det-3 aka “Area 51”, until 1985, after which the aircraft was placed into storage at “Dyson’s Dock”. On April 30th 1996, Tacit Blue was finally officially declassified. Designed to secretly monitor troop movements on an enemy battlefield, Tacit Blue featured a single pilot, with a boxy type fuselage which was commonly referred to as the “flying snow shovel”, the “inverted bathtub” or simply “the whale”.

Tacit Blue pioneered “smooth contouring” technology which significantly helped to reduce its radar cross section. Total cost of the program was $165 million. Interestingly for a stealth aircraft, Tacit Blue was flown only during the daytime, and logged a total of 135 test flights. The aircraft featured a wingspan of 48 feet, and a length of 55 feet.

Powered by two high-bypass turbo fan engines, the aircraft had a cruising speed of 250 kts, and an operating altitude of 25,000 feet. Test pilots on the Tacit Blue program included Dick Thomas and Lt. Col. Ken Dyson. Of special note on the program was Major Daniel Vaderhorst,  who has flown at least six other aircraft which currently remain classified. The aircraft is now on display at the Air Force museum in Dayton Ohio, parked directly below the Bird of Prey. 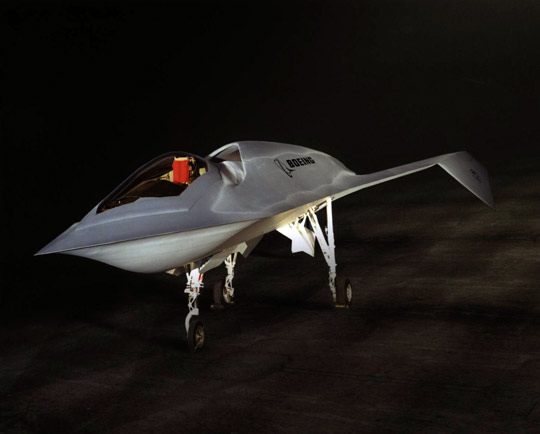 The Boeing Phantom Works “Bird of Prey” technology demonstrator was officially declassified on October 18th, 2002. Measuring 47 feet long, and having a wingspan of 23 feet, the Bird of Prey pioneered new technologies in low-observable aircraft design. A total of 38 test flights were made from 1996-1999, at the remote test site, aka “Area 51”. Powered by a single Pratt and Whitney JT15D-5C turbofan engine with 3,190 pounds of thrust, the Bird of Prey had an operational speed of 260 knots, and a maximum operating altitude of 20,000 feet.

Boeing spent a total of $67 million on the program, which helped to develop low cost disposable tooling, single piece composite construction, and 3-D virtual reality design and assembly processes. Boeing’s chief test pilot for the program was Rudy Haug. The aircraft was also flown by a second Boeing test pilot, Joe Felock. Additionally, Doug Benjamin flew the aircraft while on active duty with the USAF.

In an effort to quickly get the program off the ground quickly, and to cut costs, engineers utilized landing gear and an ejection seat from other aircraft. The craft featured an unpressurized cockpit, and lacked the fighter like responsiveness of aircraft like the F/A-18. A special gold coating on the cockpit canopy helped to reduce radar reflections from the pilot’s helmet. Visitors to the Air Force museum can now see the Bird of Prey hanging from the ceiling of museum’s modern flight gallery. 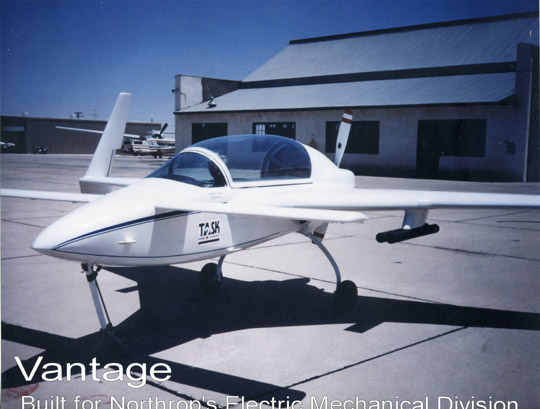 The TASK Vantage aka “Sneeky Pete”, was an advanced technology demonstrator built by TASK Research Inc. of Santa Paula California in 1982, and was built to test early avionics/electronic equipment that could fly a plane remotely (forerunner of today’s advanced UAV’s, RPV’s and UCAV’s). This single pilot manned test-bed was built by Jim Kern (president of TASK) which supplied many composite structures/components for the Rutan designed Long-EZ, Defiant, and Voyager aircraft during the early to mid 1980’s. Task Research Inc., was also involved in many military projects including the Northrop F-20 Tigershark, Lockheed TR-1 program, and supplied materials for U.S. Army helicopter blades. Note: Rutan Aircraft Factory/Scaled Composites was NOT involved in the construction/building process of the Vantage aircraft.

The maiden flight of the Vantage took place at Mojave Airport on July 18th, 1982 with Dick Rutan at the controls (Mike Melvill, Doug Shane, along with many others also served as test pilots for this aircraft). The Vantage was described as a “Long-EZ knock off”, slightly larger than a standard Long-EZ, with more rounded fuselage sides and a large bulbous two piece canopy. This particular aircraft had a wing span of 28 feet with an overall length of approximately 17 feet. Power was supplied by a single Lycoming O-360 (180 HP) engine turning a variable pitch composite propeller. The aircraft incorporated a retractable nose gear which was powered by an electric motor.  The Vantage was outfitted with various special avionics depending on the specific mission requirement.  Only one airframe was ever constructed. The designation “Sneeky Pete” was written along the side of the fuselage.

It’s believed the flight test program for Sneeky Pete took place at the remote test site in Nevada (aka Area 51/AFFTC DET. 3) starting in late 1982 and is still ongoing. The aircraft has been put into seclusion at various times, but has never been officially retired. During its “down time”, Sneeky Pete was most likely stored in a TOP-SECRET facility known as “Dyson’s Dock” at Groom Lake, which was also the location of the Northrop “Tacit Blue” technology demonstrator after it was retired in 1985. In its later variants, Sneeky Pete flew under jet power, and may have contributed to today’s advanced UAV’s and UCAV’s, which include: The Northrop/Grumman Global Hawk, General Atomics Predator, Boeing X-45, Northrop/Grumman X-47 Pegasus.  Now that the Lockheed “Senior Trend” (F-117 Nighthawk), Northrop “Tacit Blue”, “Project Senior C J” (Northrop ATB stealth Bomber), and the Boeing Phantom Works “Bird of Prey” have been declassified and reside at the USAF museum (Dayton Ohio), it’s time for “Sneeky Pete” to come out of the “black”, as declassifying this aircraft no longer poses any threat to the national security of the United States.