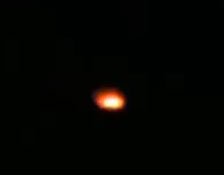 A family in Christchurch, New Zealand believes they witnessed a convoy of UFOs above their house last week. The family captured video of one of the ten UFOs traveling above their home. Neighbors reportedly also witnessed the multiple strange objects in the sky as well. The witnesses described the UFOs as flickering bright orange lights.

The description of multiple orange objects in the sky with a flickering appearance certainly resembles the appearance of Chinese lanterns. It is probable that what these witnesses saw in New Zealand were Chinese lanterns, but it is also possible that the UFOs were something else entirely.

The report of this sighting comes just one day after the New Zealand government released 2,000 pages of documents relating to UFOs.