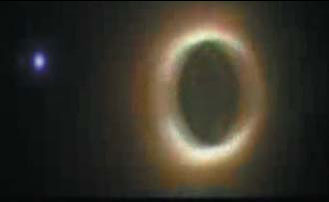 Once again UFOs have been filmed at a major solar eclipse—this time in China last July 22. The British newspaper The Daily Mail reported on Sept 7 that astronomers at the Purple Mountain Observatory in Nanjing had 40 minutes of footage showing an unidentified object taken during the eclipse. The paper quoted the Observatory’s director Ji Haisheng saying “it’s physical nature remains to be further studied…research has already started on a year-long investigation to find what it is.”

Once the story was published and picked up by several web pages, Haisheng toned down the story in the Chinese media. “Obviously, there have been misunderstandings,” the astronomer told China Daily, trying to explain that he meant “an unidentified object” and “not ‘an unidentified flying object’.” But the Purple Mountain Observatory was not the only place to capture images. China Daily reported students in Guangdong province captured a “walnut-shaped object” from a rooftop during the eclipse and that the Yunnan UFO Video Analyzing Workshop was researching the images, but these were too blurred to make any solid conclusion. In a country as large as China, more images are sure to show up. Stay tuned.