Two fast-moving objects were seen flying near the spacecraft shortly after launch. 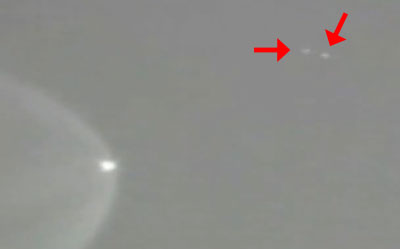 China’s NTD Television reports that two UFOs were seen immediately after the Saturday, June 16 launch of the country’s Shenzhou 9 spacecraft. An infrared camera that was recording the spacecraft also managed to record “two fast-moving dots” that appear to be “flying close to the spacecraft” as it was leaving Earth’s atmosphere.

According to the Borneo Post, viewers present for the launch did not report seeing the mysterious objects, but viewers of the live television broadcast of the launch reportedly did notice the UFOs.

Some have suggested the fast-moving objects were simply birds. But astronomer Wang Sichao of the Purple Mountain Observatory (also known as the Mt. Zijinshan Observatory) in Nanjing, China commented, “The objects couldn’t have been birds because [the objects] had to be extremely hot to be captured by the infrared cameras.” Sichao, who has also researched UFOs for more than 40 years, is open to the idea that the objects could be alien in origin. At the same time, he acknowledges that “the objects could be airplanes or maybe lights from the surface,” and he feels that “there are too many possibilities” and not enough evidence to jump to any conclusion.

Another possible identification was presented by Zhang Yunhua of the Beijing UFO Research Society who stated, “I remember the same thing happened at the launch of Shenzhou 5 and 6. They could just be insects flying in front of the ground cameras.”