UFOs were spotted by numerous residents in Toronto last weekend, causing many of them to turn to social media for answers. Toronto police confirmed they received calls about the UFOs as well, and one constable participated in the online conversation and tweeted about it.

Strange light spotted up in the sky in willowdale. What’s going on?! #strangelight #ufo #toronto pic.twitter.com/bL3Cim3Wfq

Toronto police told local newspaper The Star that they began receiving calls at around 7 pm Saturday night. People reported seeing the lights near Yonge St. and Empress Ave in the North York section of Toronto. Police Sergeant Barry White told The Star, “[Officers] were stopping to talk to people, and we did hear from others on the street that apparently there was something up there.”

However, White says he was not sure how they were supposed to respond to UFO sightings. He said, “If it was something dangerous and we could do something under the criminal code, we might. Police would go try and check it out, but to actually go and investigate it further as a UFO — I don’t think we would. I’m trying not to laugh!” White did acknowledge that officers had reported the sightings themselves, but they were not sure what they were. Some officers suggested that they were perhaps remote controlled quadcopters. Police constable Craig Brister tweeted, “I’ve been a police officer for 15 years. Tonight I have a first! My first report of a UFO!! He was serious! #quadcopter”

Brister admitted he saw the lights himself while biking, and his tweet was his best guess as to what was flying around.

Others have suggested that the lights were from night kites lit up with LEDs being flown at the nearby McKee park. This may account for one of the first reports.

Sebastian Setien says he first saw an object at 4:18 pm. He was entertaining guests and saw a triangular object while barbequing on his balcony. He says the object wasn’t doing anything, so he just went back inside.

He told The Star, “I thought it was a weather probe or a drone. Then at night time we come back out to have a beer on the balcony and then we see these lights.”

Setien’s second sighting was at 8:40 pm, at which time he says he started to video tape the objects.

Setien was not the only one capturing UFO videos at around 9 pm that night. So was Sarah Chun on nearby Finch Street. She says she saw six or seven flashing lights in a long row hovering diagonally across town. She got out her iPad and began recording.

Her video shows these strange lights hovering above North York. She also captured one of the lights closer to her.

“It was really high up, and was round, bright, and shining,” Chun told the Star. “At first I thought it was stars or something, but it was too bright to be. I didn’t know what it was.”

She says she watched the object above her for 25 minutes before “it kind of flew, and then disappeared.” She then posted the two videos she had captured on YouTube before going to bed.

While she slept, Chun’s videos went viral. She got thousands of hits that night, and as of the moment I type these words, it has nearly 850,000 hits – it had around 775,000 when I started writing this story. Media outlets across Canada are now writing about the mysterious lights.

Lending credence to the kite theory, one witness, Roxanna Malecki, said the objects looked like they had strings with “sparkles of diamonds.” 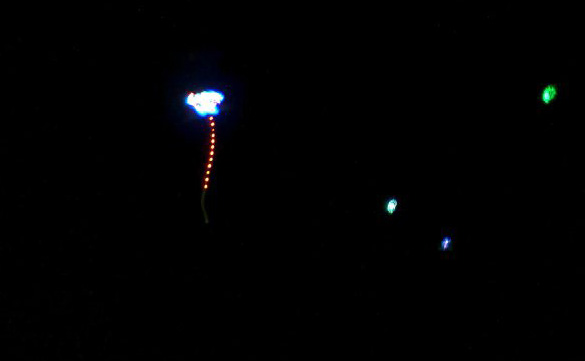 She continued, “I was so nervous. Everyone was screaming, ‘What the hell is that?'”

So was it kites that have created all of this ruckus? Checking a map, McKee park is pretty small. Chun’s video shows lights that seem to span a great distance. 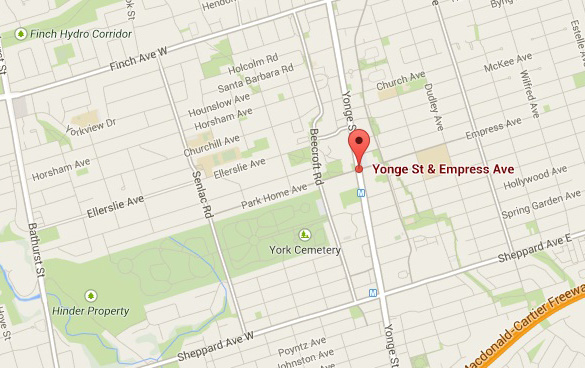 As for quadcopters, UFO researcher Victor Viggiani told the CBC quadcopters don’t sit and hover for long lengths of time like these objects did.

Another suggestion has been Chinese Lanterns. Often wind will carry them in one direction making them look like a long train of lights. Viggiani isn’t convinced. He says these are genuine UFOs. Malecki seems to agree. She says she thinks extraterrestrials are involved.