A UFO appears to be hovering over an iceberg in eastern Canada in a video that was recently uploaded to the Internet.

The individual who shot the video describes:

So I really don’t know what to say about this, while driving around Salvage, Newfoundland and Labrador looking at all the icebergs, I noticed what appeared to be a chunk of ice just barely attached to an iceberg, hoping to catch it collapse I took out the camera and zoomed in. What you can see is a white object not attached to the iceberg, but rather spinning around and changing shape? 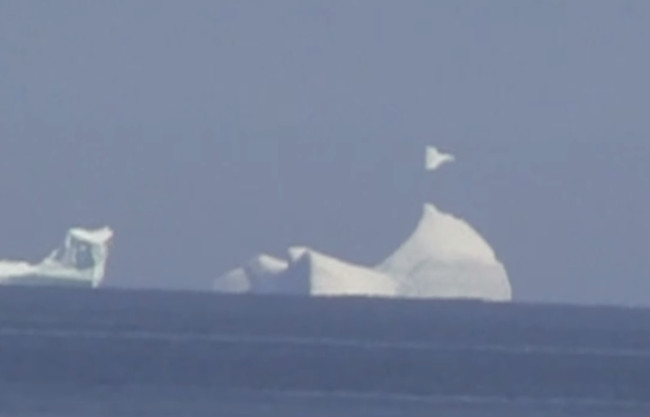 UFO over an iceberg? (Credit: 235FireFly/YouTube)

Focusing on the hovering object, the Daily Mirror points out that some believe it to be an alien spacecraft, while others believe it to be a flag. The object’s shape-shifting would make sense if it is simply a flag. But this identification would not explain the witness’s assertion that he observed the object spinning. And the witness confidently states, “I can assure that it is not a flag, that iceberg was probably 5, 6 stories tall . . . and they tend to collapse, break and roll over all the time . . . not something that people do around here.”﻿

One possible and likely explanation for this strange hovering UFO is a type of mirage known as a Fata Morgana. The National Snow and Ice Data Center explains that this type of superior mirage appears

because of the weather condition known as a temperature inversion, where cold air lies close to the ground with warmer air above it. Since cold air is denser than warm air, it bends light towards the eyes of someone standing on the ground, changing how a distant object appears. Superior mirages can produce a few different types of images: Distant objects can appear to float high above their actual position, for example a boat can look like it is floating in the sky, or an object below the horizon can become visible. 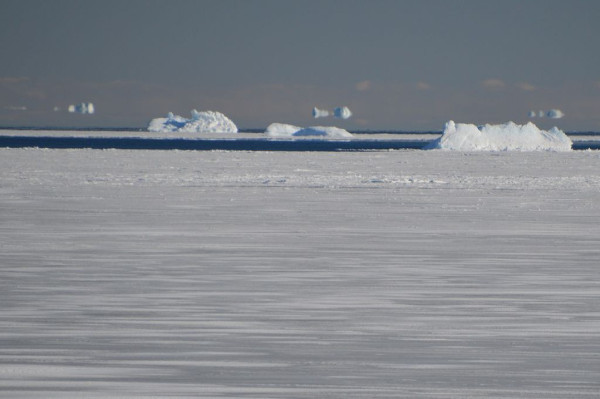 Some who have watched the UFO video are more interested in an unidentified object that appears to the right of the iceberg at the 0:45 mark and splashes into the water. But this object’s appearance and behavior do not suggest anything to indicate that it is anything but a diving bird like a Northern Gannett, which is common in that area.

Some have criticized the witness for only shooting forty eight seconds of video. But he explains that he was in his car, using the window to stabilize the camera when another car drove up, and someone got out to take photos of the icebergs, which obstructed his view. He claims that he resumed filming approximately one minute later, but the object was no longer visible.

The witness states that he is “open to all opinions, ufo, illusion or what?” He also admits that “This is easily the strangest thing I have ever witnessed in my life.”

What do you think about the two UFOs in this video? Share your opinions by leaving a comment below, or by posting on the Open Minds Facebook page.