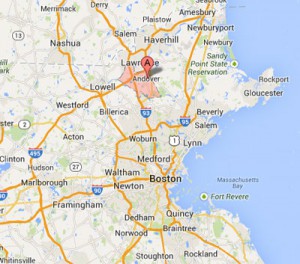 The witness had just left work that evening when the four mysterious lights appeared in the clear sky. In the sighting report filed with the Mutual UFO Network (MUFON), the witness describes that the objects silently flew through the sky, and the “first 3 lights were in a triangle formation and the 4th light traveled behind the triangle.” All four lights kept the same distance from each other. And although the description of this formation resembles military aircraft, the witness added, “I see military jets taking off a mile from the airport and these lights were traveling at perhaps a slower speed, and perhaps just a bit lesser altitude gain.”

After these four initial lights disappeared, many more lights appeared in the sky. The witness explains:

I then witnessed light after light come off the horizon from the North and travel the same pattern, the same speed, probably about 12 more lights total. Some came off the horizon at a constant rate, I would guess they were about 30 seconds apart from each other and seemed to be equidistant from each other coming one-by-one. Others came out perhaps at a 45 or 60 second interval. All lights traveled at a constant speed, at the same speed as the other lights, and all traveled on the same linear path and seemed to eventually disappear. I would estimate it took about 75 to 90 seconds from the time it came from the horizon until it fully disappeared.

The Metro offers the possibility that these UFOs could simply be Chinese lanterns. Based on the witness’s description, these paper sky lanterns are a likely explanation for what was in the sky above Andover.

Sky lanterns are basically miniature hot air balloons. The air inside these paper lanterns is heated by a fuel cell, which causes the lantern to rise into the sky. The witness describes that the lights “flickered just a bit but did not blink,” which is consistent with the appearance of a sky lantern’s flickering fuel cell. The witness also adds, “I tracked one light as far as I could and it just got smaller and smaller, further away, then went out of sight like you would track a helium balloon.”

Although the appearance and behavior of the UFOs described by the witness match those of sky lanterns, no official explanation has been given to identify the UFOs over Andover on December 19.