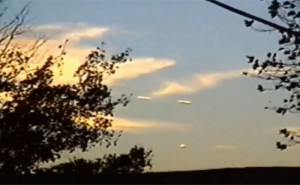 According to Italian website Segnidalcielo, the video was recorded on a farm in July 2011. The Epoch Times reports that this video was shot somewhere near the Portugal border in Spain. The source of the video is unknown, but it was uploaded to YouTube on November 2 by UFO Disclosure Ireland–a YouTube channel with a description that reads, “We along with many other groups on YouTube have joined forces to show the world that there are glowing pulsating balls of light, saucer-disc shaped objects, tubular and elongated craft and triangular shaped objects that are moving state to state, country to country across vast sea’s all tagged on radar often in intercept situations with military craft.”

As the Epoch Times describes, “The film shows is a disc-shaped object then two cigar-shaped objects that seem to appear and disappear from behind a curtain of sky.”

Some believe the video is a poorly attempted hoax. But because of the video’s mysterious origins, it seems unlikely that much more information will come to light.