UFO video over Boise, Idaho is a MUFON “top case”

The Mutual UFO Network (MUFON) has listed a video from Boise, Idaho as one of their top cases from 2013. The video itself is interesting. However, what is more interesting is that the UFO was sighted by three separate groups of people, and all of the reports were very similar.

The sighting took place on the evening of December 24, 2013 at approximately 9:15 pm. The reports were all within 9:15 to 9:30 pm. The object was reported by all parties as being a bright red light. They also say that a second red light appeared to drop down from the first. It moved slowly and then sped off quickly as both objects disappeared.

The witnesses who took the video of the object are a married couple who say they were driving when they first saw the red light. The male witness wrote in his report, “It caught my eye because I am always looking up for strange lights.”

He says his wife recommended they pull over for a better look, so they did. He says they could then tell that the object was not moving. The couple decided to rush home to get a camera to record the lights. He told the MUFON investigator that he always keeps his camera charged just in case he sees a UFO.

The witness said they only watched the object for a few second before rushing home. Prior to filming they had seen a small orb drop from below the object. He says they caught a second object dropping from the bright red light on camera.

In the video (seen above) a small blinking object can clearly be seen dropping from a larger brighter one. It moves down, then moves up again, before dropping down and moving off screen very quickly. 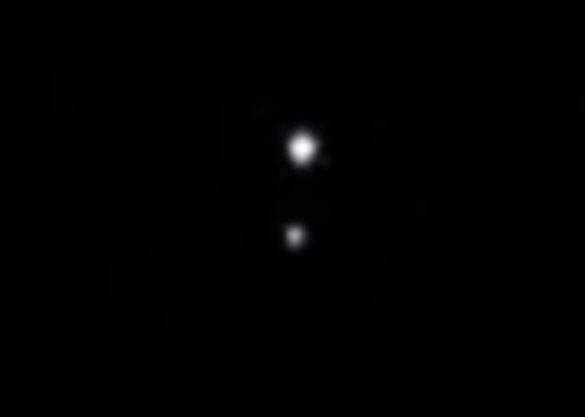 A close up of the smaller object dropping from the larger one in the UFO video caught by witnesses. Although witnesses reported a red light, it looks white in the video. (Credit: MUFON)

He wrote in his report:

“Got home ran inside grabbed my camera and got it into view just in time to see it drop another orb but this one was flashing. It was moving down slowly then stopped and almost seemed to come back up. Then the flashing object went back down and stopped for a second then shot down to the ground. I didn’t realize the speed of the objects decent until watching the video back in slow motion. It was like a bullet and didn’t make a sound. After the second object was out of view I zoomed in on the initial object and it flickered and blinked out.”

They actually submitted two videos that are combined in the video at the top of this page. A representative from MUFON says they think they paused filming and started up again immediately after, causing there to be two videos.

A second group of witnesses was a family out driving around looking at Christmas lights. The witness says they were out between 9:15 and 9:30 pm when they spotted something.

He wrote, “I looked up to the Northeast over my house and saw a VERY bright red globe hovering in the distance. expecting it to be a helicopter I realized it was not flashing and was not quite the right shade of red. I pointed this out to my family and they watched it with me.”

He says the object was not moving, and he found it “disturbing” that the object also made no sound.

They also witnessed a second object fall from the first. He wrote, “…a secondary object dropped from the main one slowly going down leaving a small trail. as it headed down it sped up in its decent out of sight. after that the main object literally just disappeared.”

He says they told some family members and his brother-in-law felt he had also seen the object.

The third set of witnesses was a stay at home mom with her 2 children. She says she went out to heave a smoke when she spotted the UFO. She then called for her kids to come and take a look also. She said she saw a bright red light slowly moving to the east. She also says she saw a smaller object drop from the first. She says it moved down and then dropped faster out of sight.

She says went back inside soon after, because the light has disappeared. She came back later with a camera just in case it reappeared, but it was nowhere to be seen. However, she says she did see something else that was odd.

The MUFON investigator wrote, “…she said that there was a black plane and it had two big yellowish white lights like searchlights and was moving slowly in the same area.”

She told the investigator that she was adamant that she and her children had seen a UFO.

She wrote in her report, “This really freaked me out! I watch the sky all of the time and have never seen anything like this before.”

The MUFON investigator for the case was Charles Stansburg. He could not explain what the witnesses might have seen, even after making inquiries to local authorities.

He wrote, “I called Mountain Home AFB and Gowen Army Air National Guard and both claim all aircraft were on the ground and no flights at all went up. I also checked with the Ada County SO and the Boise PD and no calls were made about any odd appearances in the sky.”

Stansburg took a map of the area and drew lines in the direction the witnesses said they saw the object. He was able to determine the object was in an area called the Camel’s Back Reserve. 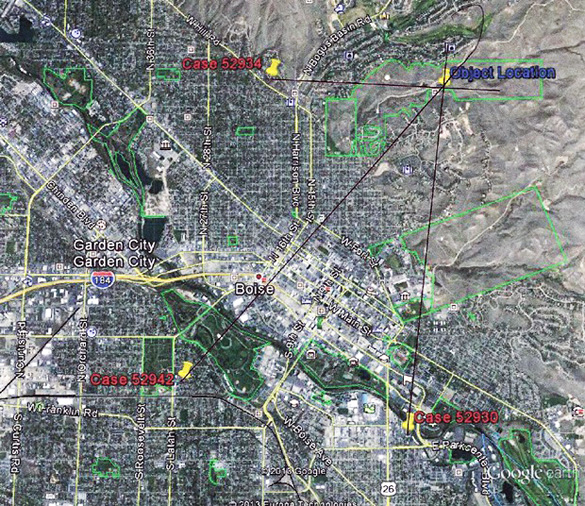 Map triangulating the position of the UFO. (Credit: MUFON/Google Maps)

The case was closed as “Unknown UAV.” In MUFON terms that is a UFO.

MUFON’s Science Review Board takes a closer look at the UFO cases that investigators could not explain. They will then complete a report on the top cases. This week they posted the case files for the top cases of 2013. You can go to their site to get the files for this case and the 7 other cases they have deemed top cases. This case from Boise is the only video case of the bunch.

The case files can be found at this link on MUFON.com.