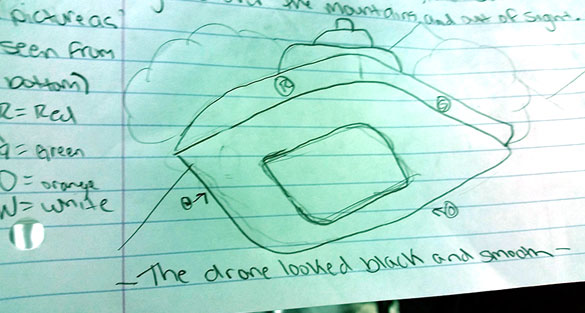 An Alaskan witness at Old Harbor reported watching a UFO gliding and hovering around the boat harbor area beginning about 8:15 p.m. on January 14, 2016, according to testimony in Case 74166 from the Mutual UFO Network (MUFON) witness reporting database. 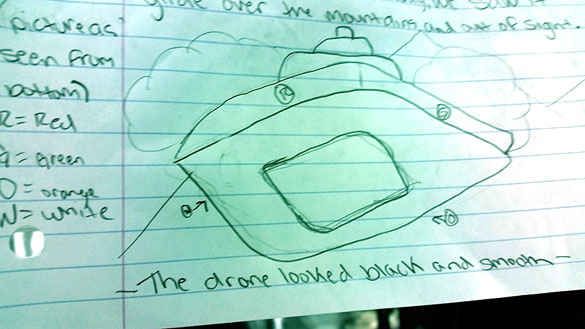 “As I rounded the corner by the culvert I thought I saw a shooting star off to my right, towards the hillside,” the witness stated. “As I got to the store/boat harbor area, I realized it was three blinking lights close together. I thought maybe it was a remote control airplane or a drone because it was really dark out, too late for planes to fly and too close to the hillside.”

The witness stated that the object was flying pretty fast and she lost sight of it and continued driving.

“When I arrived at the school I could see the three girls swinging on the swing set waiting for me. My daughter came running at me full speed waiving her arms. She was all excited saying, ‘Did you see that mom? It was a big drone or something right above us. It hoovered right above us.’”

The witness searched the sky above the school and caught sight of the blinking lights with three colors.

“The object traveled fast, south, toward the church, and then took a sharp left out toward the bay. It headed straight to the airstrip fast. I thought it was going to land. My daughter wanted me to follow it. I turned by the post office and headed for home.” 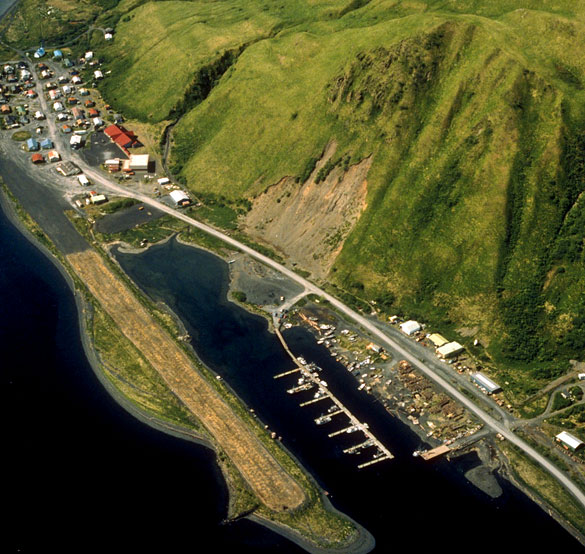 The witness first saw the object as three blinking lights and thought it might be a drone. Pictured: Old Harbor, Alaska. (Credit: Wikimedia Commons)

The four were almost back to the culvert when they spotted the object heading toward them from the airstrip.

“It was still out over the bay. My daughter wanted me to stop the truck. She said it was coming closer to check us out and that freaked me out, but I stopped the truck anyway at the first beach pull-off after the culvert.”

The daughter also testified in the case. 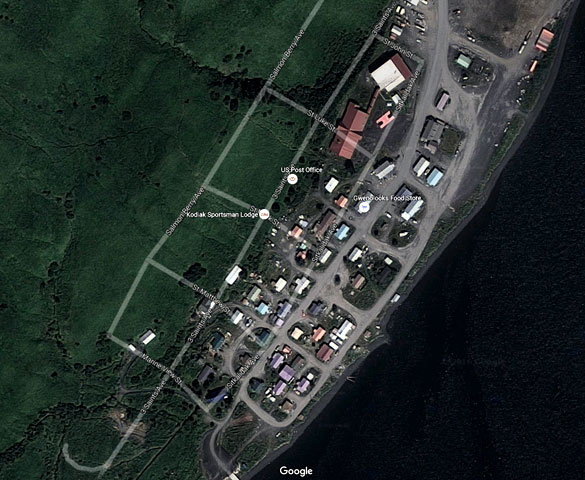 “On Russian New Year’s Eve, my two friends and I left night gym early,” the daughter stated.“As I waited for my mom, I heard a buzzing noise, almost like a blow drier. I was swinging on the swing set and we saw it hover for some five minutes about eight feet above us. After my mom pulled up, it glided toward the church and then over the ocean toward the airport. This drone-type object was about the size of the hood of a truck and was diamond/pyramid-shaped. You could see several layer/steps, top to bottom and a different light on each side – red, green, orange and white. After we saw it gliding towards the airport my mom turned the truck off the road and I could see the drone was tracking us. We continued home and after parking in our driveway we saw it glide over the mountains and out of sight.”

Old Harbor  is a city in Kodiak Island Borough, Alaska, population 218. Please remember that most UFO sightings can be explained as something natural or man-made. The above quotes were edited for clarity. Please report UFO activity to MUFON.com.