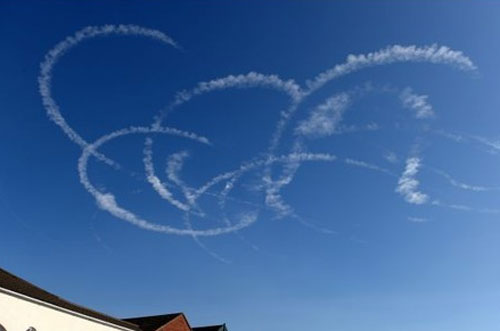 Strange arching contrails appeared in the sky above North East Lincolnshire, a county in eastern England, on the morning of Thursday, March 14. And some assert these were created by UFOs. 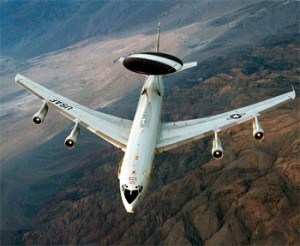 Circular contrails are not unheard of, especially in the Lincolnshire area of England. The military base RAF Waddington is located approximately forty miles southwest of where these contrails were spotted. And according to the RAF (Royal Air Force) website, it is from that base that the RAF operates “seven E-3D Sentry aircraft in the airborne surveillance and command-and-control role.” These planes routinely circle the skies conducting surveillance, and, therefore, they occasionally leave interesting circular contrails behind.

But according to the Grimsby Telegraph, both the RAF and U.S.A.F. say the contrails were not caused by their planes.

The Grimsby Telegraph‘s picture editor Jon Corken recorded video of the contrails. He also posted the following message to his Twitter account:

This was UFO’s. I saw them. #area51 m.thisisgrimsby.co.uk/story.html?aid…

It would not be surprising if the military didn’t want to disclose information related to surveillance activities. So it is certainly possible that there were military surveillance aircraft in the sky that day, despite the denial by U.S.A.F. and RAF. But with the military denying involvement, and with the brief, yet confident, witness testimony of seeing UFOs, some wonder if UFOs, terrestrial or otherwise, were, in fact, responsible for the circular contrails.