Home / Articles / Psychology Professor and UFO researcher Robert LeLieuvre passes
Dr. Robert LeLieuvre was a professor of psychology at the University of Great Falls in Montana, teaching his courses online while living in Roswell, New Mexico. 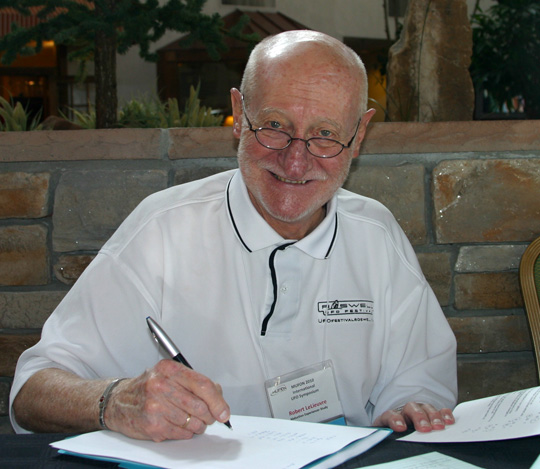 Dr. Robert LeLieuvre was a professor of psychology at the University of Great Falls in Montana, teaching his courses online while living in Roswell, New Mexico. Dr. Robert LeLieuvre began volunteering to help with the annual Roswell UFO festival and parade. He also took an interest into the psychological studies of people who believe they have been abducted by aliens.

Often the media or psychologists claim that abductees tend to be fantasy prone. However, they do not have studies to back these claims. In fact, a study done by Kenneth Ring and Christopher Rosing in an article in the Journal of UFOs Studies in 1990 entitled, “The Omega Project: A Psychological Survey of Persons Reporting Abductions and Other UFO Encounters,” found just the opposite to be true.

Dr. Robert LeLieuvre along with Teresa Larson and Heather Remington did a preliminary study to reproduce Ring and Rosing’s findings and found similar results. Later LeLieuvre headed up a larger study with Lester Velez and other members of the Mutual UFO Network (MUFON) abduction study group. Their results were also similar to Ring and Rosing. They found a host of other interesting information and the results were printed in the MUFON journal, along with a summary prepared by Dr. LeLieuvre that was printed in the October/November issue of Open Minds Magazine. Les Velez will appear on Open Minds Radio December 13 to talk more about this study.

It is unfortunate that we will not be able to benefit from further studies by Dr. LeLieuvre. On a personal note, I have been involved with the Roswell city festival for several years, as a speaker in 2008, an organizer in a partnership the city made with MUFON in 2009 and with Open Minds which was the major sponsor of this year’s event. It was always a great pleasure to work with Robert who would do whatever it took to get things done, working many hours every day. He always had a smile and kind words for everyone, and I found it a great pleasure to spend time with him. I occasionally saw him at the MUFON Symposium and he was one of those people I would hope to run into at the various UFO events held around the country. I will miss him. 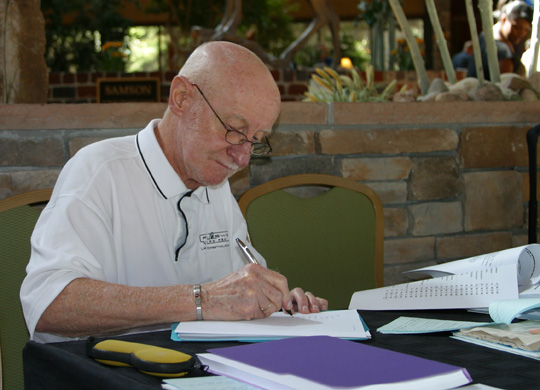 Dr. Robert LeLieuvre working on the study at the MUFON Symposium in 2010. (image credit: Alejandro Rojas)

Dr. LeLieuvre had a very impressive past, so I will include his official obituary here, which, along with information on his funeral, can also be found at the Ballard Funeral Home website. Incidentally this is the same funeral home that a man by the name of Glen Dennis worked at in July of 1947, when he claims he was asked about providing two small hermetically sealed caskets, presumably to be used to carry the bodies of extraterrestrial bodies recovered from the crashed space ship in the Roswell area.

Robert Bryson LeLieuvre died of pulmonary complications in Roswell, New Mexico on December 1, 2010. He was born to Armand and Agnes Bryson LeLieuvre on September 5, 1944 in Waltham, MA. He grew up close to his parents and extended family; Joseph and Mame Sheridan and their daughters Mary Sheridan and Barbara (Steve) Rando and their children and grandchildren. He leaves behind in-laws and their children; Inta and Imants Abele and their daughters Diana and Laurie, Julia and Ray Wiggington and their children Ed Wiggington and Deb Merino (John) and their children Anna and Alex and Visvaldis and Bonnie Zarins and his daughter Laurel. He also leaves behind his forever person, his wife Laima. He was much loved and will be greatly missed. He was lucky to share deep friendships and meaningful professional relationships with people in Massachusetts, Ohio, Indiana, Maine, Illinois, California, New York, Montana, New Mexico, Ireland, Taiwan, Malaysia and Austria.

Robert earned an A.B. from Boston College and M.A. and Ph. D from the University of Cincinnati. He was an academic and clinician. He taught at Bradley University, Indiana-Purdue University, Goddard College and Stone Child College. He was Associate Dean of the College of Professional Studies at University of San Francisco. He was visiting faculty member at the National University of Malaysia and the University of Illinois College of Medicine. He served as senior clinical psychologist at St. Brigid’s Hospital County Louth,, Ireland and in other clinical positions at the Golden Triangle Community Health Center in Havre, MT and the Kennebec Valley Mental Health Center in Waterville, ME. Robert is distinguished nationally through his research on the psychology of those reporting experiences with UFO’s and aliens. He also published a book, PEOPLEWORK with his co-author Judy Powell. Robert a professor of psychology at the University of Great Falls from 1995-2007 when he moved to distinguished faculty status. In 2000, Robert was awarded the Marich Outstanding Faculty Award. His colleagues were valued as friends and professional inspiration. He respected and enjoyed all his students. His teaching allowed him to live the dream of doing something he truly loved.

So, Robert, you were one of a kind. We love you, thank you and salute you for a job well done and wish you Godspeed. Robert’s family will have a mass for him at St. Mary’s in Waltham. The University of Great Falls will hold a memorial service in January. There will be a local service of prayer and gratitude at St. Mark’s Lutheran Church in Roswell on Monday, December 6, 11:00 a.m.

In lieu of flowers the family request contributions be made to their local humane society in memory of Robert.

Arrangements have been entrusted to Ballard Funeral Home and Crematory. An online obituary can be accessed at www.ballardfuneralhome.com.