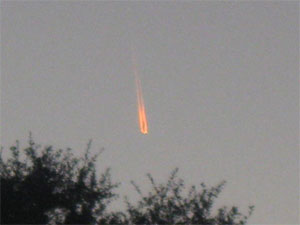 A mysterious object was reported in the sky above Polk County, Florida last night.

Several witnesses reported the UFO to local Fox affiliate FOX 13. The bright object was followed by a smoke or vapor trail. Witnesses were unable to determine if the object was burning up, or if it simply had an illuminated vapor trail because of the setting sun. The UFO could have been a meteor or space junk entering Earth’s atmosphere, but witnesses were not able to determine the object’s identity, and FOX 13 has been unable to reach experts who might be able to identify the strange object.