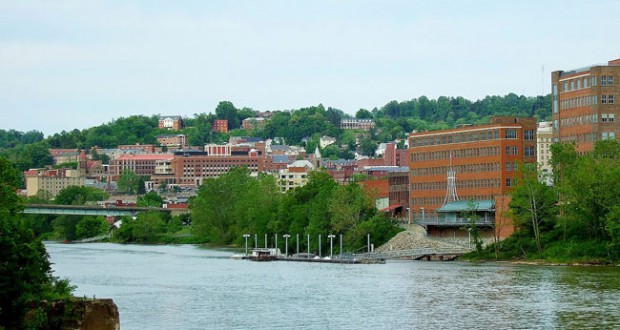 City of Morgantown from the west side of the Monongahela River. (Credit: Wikimedia Commons)

A West Virginia witness at Morgantown reported a hovering UFO “larger than a plane” about 1:15 a.m. today, according to testimony in Case 60886 from the Mutual UFO Network (MUFON) witness reporting database.

“I have been watching this thing for 30 minutes to an hour,” the witness stated. “It stays in its location but moves around in a zigzag or dancing pattern side-to-side and up and down without actually going anywhere. It hovers in same spot for long periods.”

The object seemed to get out of the way of a passing airplane.

“When a plane was approaching at about the same altitude, it moved up about double and then triple the space above the plane. After the plane passed, it came back down.”

Twenty-five minutes after first observing the object, the witness was still watching it.

“I am between Grafton and Morgantown on Route 119. The UFO is in the eastern sky. When I first started watching, it was just to the right of the dipper. It is lower in the sky now and the dipper is up above. I tried taking photos with a camera phone and a video camera which ran out of power and then film. Don’t know if I got anything.”

The witness report indicates the object was hovering at 500 feet or lower and was approximately one mile or more from the witness.

MUFON has been receiving more UFO reports from West Virginia than it normally gets. Five other UFO case investigations are underway for cases that occurred during October. We previously updated the ongoing story there as: West Virginia UFOs: New sighting describes cigar UFO hovering under 500 feet and Uptick in West Virginia low flying UFO cases.

Please keep in mind that most UFOs can be identified as something natural or man-made. The above quotes were edited for clarity. No images or videos were uploaded with the MUFON report, which was filed on October 24, 2014. West Virginia MUFON is investigating.