Home / Articles / UFO News / UFO recorded over the River Thames causes a stir
A glowing UFO was recorded on video as it hovered over the Thames Estuary in England.

UFO recorded over the River Thames causes a stir 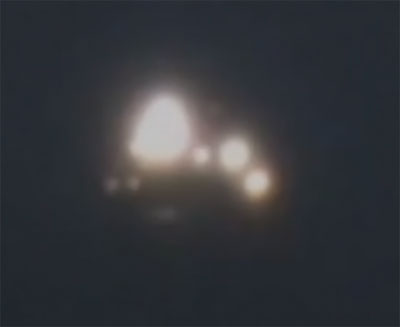 UFO over the Thames (Credit: Space999dude/YouTube)

A glowing UFO was recorded on video as it hovered over the Thames Estuary in England on Sunday, February 5. The Daily Mail describes that, in the video, “The mysterious, oval aircraft can be seen suspended in the air displaying several amber-gold lights of varying sizes.”

As is the case with many UFO videos, this video is shaky and pixelated, and therefore it is difficult to make out any real detail or determine any movement from the object in question. The witness explained that the camera was hand-held while he shot this video, and he was using the camera’s full 40x zoom.

The witness, YouTube user Space999dude, uploaded this 53-second video to his YouTube account. The Daily Mail brought attention to a few comments left by skeptical viewers. For example, one viewer asked, “Why stop filming after 53secs.” The witness answered this question, explaining that he shot the footage from his car, but had to stop recording because he was parked illegally and had to move his car.

Other viewers criticized the witness for not zooming out to “give us some perspective” and to give us “something to compare it with.” So the witness posted a second, longer video on Wednesday, February 8. This video includes a zoom-out, and is longer in duration.

It’s a little strange that the witness had a longer version of his video that just happened to address two of the main complaints with his first video. But regardless, Space999dude’s videos have garnered widespread attention from mainstream media outlets around the world in just a few days.