On Saturday the 22nd of June 1974, at about 14:30 in the afternoon, Mr. Jerma Viita, while biking near his home saw and took two photographs of a large UFO in the sky.

“I was about 1 kilometer from my home and had reached the edge of a small weed. I saw a car, a Citroen, coming towards me. When the car was about 20 meters from me, the noise suddenly stopped, and the car rolled noiselessly several meters and then stopped at the roadside. I was several meters from the car when I saw two persons get out, a man, the driver, and a woman. The woman said something, pointing with her finger towards the sky. I looked in the indicated direction and then saw that behind my back an object of a golden color appeared. I stopped my bike at once. I had my camera around my neck. It was ready and not in the case. I took a picture of the UFO as it made a slight turn. I reset my camera once more and took one more photo, but the UFO had now moved rather far away, its speed having increased noticeably. I was sure the 2nd picture would not come out, as the speed of the UFO by then was rather high. Then it disappeared completely. It looked to me as if the UFO just shrank.” 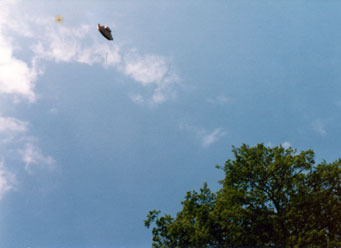 “I addressed myself to the persons from the car asking them what they had seen. A third person had got out of the car by now. I had not noticed him before. I saw that the number plates of the car were French so I asked whether they spoke Danish. The driver of the car answered that he spoke Swedish. The ma and the woman were Germans living in Paris. The third person was a young boy, a Japanese who was traveling around in Europe. He was on his way to Finland. All three of them had seen the object. The driver of the car told me that the cars motor had suddenly stopped , and so had a cassette recorder belonging to the Japanese.” 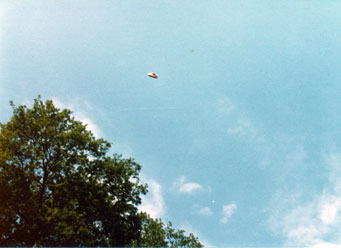 “The UFO visually seemed to be a bit different from what it looks in the pictures. To me the UFO seemed to be more round, whereas in the pictures it appears to be more flat. The UFO was of a golden color, but around its edge was something like a powerful greenish hail, not visible in the color pictures. On the craft something like window openings were seen too. We did not see the bottom of the UFO”. 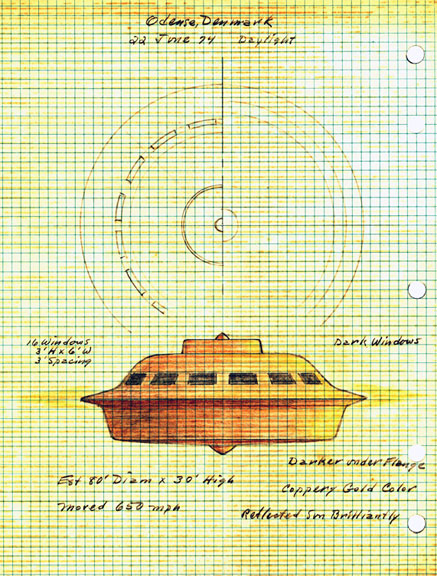 “Our estimates of the altitude of the UFO differed considerably. The German man estimated the flight level to be no less than 600 meters, the Japanese thought about 400 meters, and the woman thought 60 meters. I guessed about 200 meters. In the first picture the UFO is flying about about the speed of a jet fighter aircraft and in the second much faster. There are about 2 seconds between the taking of these two pictures. The entire sighting lasted less than one minute.” Photogrametric calculations made by Skylook researchers indicated a diameter of about 80 feet by 30 feet high. It had 16 window-like structures about 3’ high by 6 ‘ wide with 3’ spacing between them. It covered approximately 2,400’ distance in 2 ½ seconds indicating a speed of about 600 mph. It is estimated to be about 1,200’ distant in the first photo and 3,600’ in the second.

The camera was an Agfa Optima 500 sensor (1:2, 8/24) with automatic diaphragm connected to a photometer.