A man south of Mexico City has captured a UFO on three separate videos in one day. Two of the videos are during the day, and one is at night, although it is unknown whether they are all the same object.

Jesus Correa posted the videos on January 12, 2014. He says he caught them earlier in the day. The first two videos show an object floating around the sky during the day. The object appears to be shiny and elliptical. It moves slowly, but unsteadily, as if it may be floating in the wind.

The object is not shaped like a typical balloon, although its movements are also not outside of what a floating balloon is capable of.

The last video is titled “light orange,” and shows a light in the night sky. It shifts from being clear to hazy, indicative of clouds moving in front of the object. The object also does not appear to move.

In the description of the first video (seen above), Correa writes: 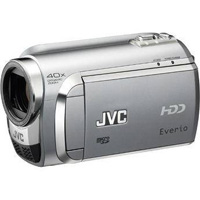 A JVC Everio camera like the one used to record these videos.

“Object videotaped on Sunday January 12, 2014 south of Mexico City at 3:14 pm, one GZ_MG630AU JVC everio camcorder model was used. They are 3 different shots.”

As for the night time video, he writes: “light taken from my backyard, a uniform until it stopped and disappeared appreciation movement.”

Both comments were translated from Spanish using Google Translate.

So far, the videos have been picked up by UFO Sightings Daily and KpopStarz, and have the potential to go viral. The question is, did Correa capture balloons and stars, or UFOs from the stars? Let us know what you think.