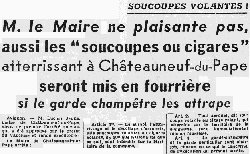 Inspired by the style of wine made in the French city of Chateauneuf-du-pape, California winery Bonny Doon, has decided to honor the town by naming their wine after an interesting chapter in the city’s past involving UFOs. Starting in late 1954 people throughout France began reporting UFO sightings. The sightings were popularized by heavy media attention, and became a concern for the citizens of France. The most common shape of the crafts reported were cigar shaped, called “Cigare Volant” in France, meaning flying cigar.

Although there were no sighting reports from Chateauneuf-du-pape in the press, the people of the town were so concerned by the sightings and the effects the UFOs may have on their wine, that the mayor banned the UFOs from landing in their vineyards. The town’s controversial decision made the news of several French papers of the time, including this news clip in the Le Haut-Marnais Républicain, of Chaumont, France.

Mr. Mayor does not joke around, therefore the “saucers or cigars” landing in Chateauneuf-du-Pape will be held in custody if the rural policeman catches them

Avignon. — Mr. Lucien Jeune, mayor of Châteauneuf-du-Pape, has just taken the following decree which was approved by the prefect for the Vaucluse and was made executory:

The Mayor of Chateauneuf-du-Pape decrees:

Article 1. — The overflight, the landing and the takeoff of aircraft known as flying saucers or flying cigars, whatever their nationality is, are prohibited on the territory of the community.

Article 2. — Any aircraft, known as flying saucer or flying cigar, which should land on the territory of the community will be immediately held in custody.

Article 3. — The forest officer and the city policeman are in charge, each one in what relates to him, of the execution of this decree. 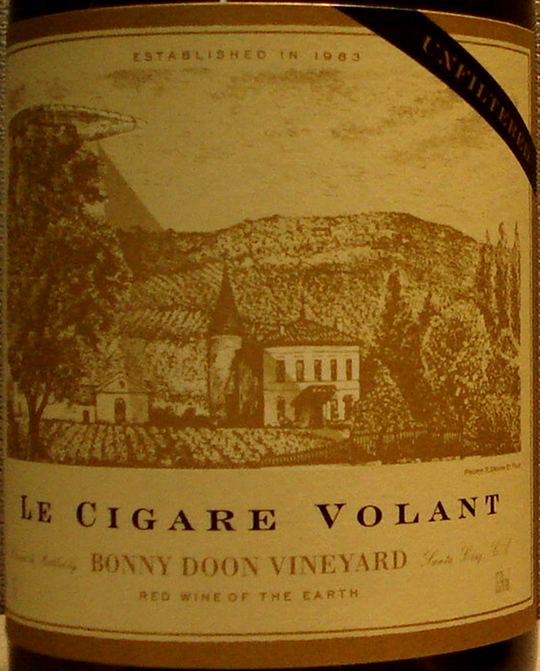 The back label reads:

“In 1954 the village council of Chateauneuf-du-pape was quite perplexed and apprehensive that flying saucers or “flying cigars” might do damage in their vineyards were they to land therein. So, right thinking men all, they created an ordinance prohibiting the landing of flying saucers or flying cigars in their vineyards. (This ordinance has worked very well in discouraging such landings.) The ordinance further states that any volitational object that did alight was to be taken immediately to the pound.

No woofer this wine, we feel rather that it is quite a stellar accomplishment. The composition of our Flying Cigar is based on the traditional ingredients of Chateauneuf-du-pape…” 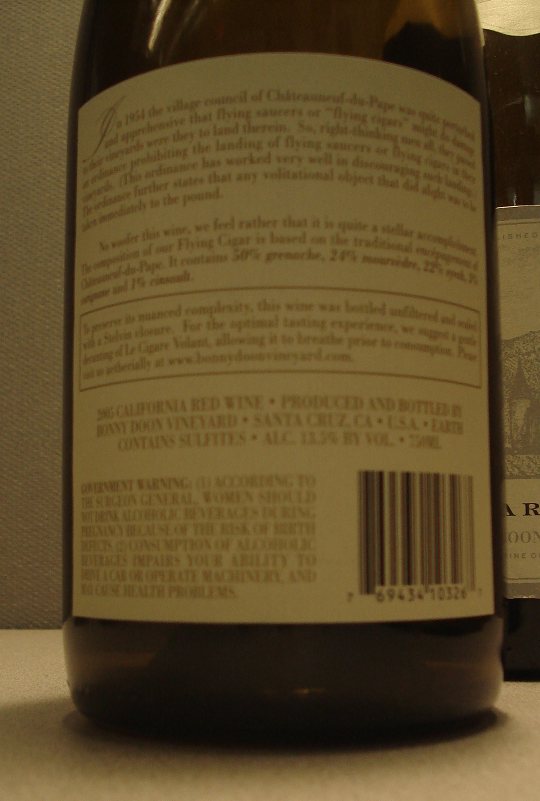 Back of the Le Cigare Volant label.

I have tried El Cigare Volant, the empty bottles in these pictures are evidence of that, it is a delicious red wine. They also make a white, called El Cigar Blanc. The labels on the bottles are beautiful, and if for no other reason, I recommend purchasing a bottle for posterity. 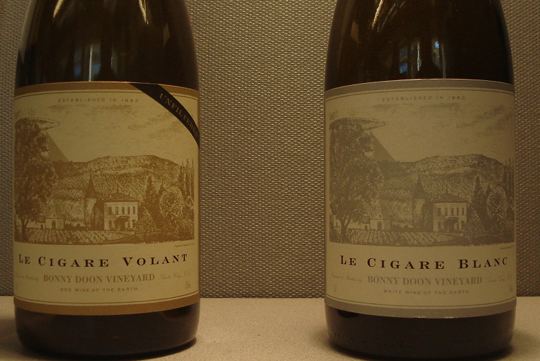 The 1954 French flap produced many reports and the website Ufologie.net has done a great job documenting it, including scans of some of the original news stories like the one included in this story. Who would have known that it would take 50 years after the decree made in Chateauneuf-du-pape, for the development of the recent exopolitical movement to examine the political ramifications of extraterrestrial visitation. Perhaps the people of Chateauneuf-du-pape will prove to be ahead of their time, and the first to pen cosmic law in future full of exo-bureocracy.