A group of techies have turned to crowd-sourcing in order to fund their idea of a UFO hunting mini-satellite. After an unsuccessful run on the crowd-sourcing website Indiegogo, their second campaign, via Kickstarter, has proven successful, and they have received the funding needed to build and launch their mini-UFO hunting device.

“We made our goal, but we still need donations to help pay for all the other stuff that we will incur as the project proceeds,” said Shock via Facebook. “We still have a few more days left on our campaign so stop by our page and donate a few dollars if you can.”

CubeSat for Disclosure plans to add cameras, a way to communicate and download information from the satellite from the ground, and a scintillation counter. The group says the scintillation counter “enables us to measure the various radiation in our satellite’s environment.  This is significant as it enables us to detect high energy particles, radiation, and other phenomenon.” 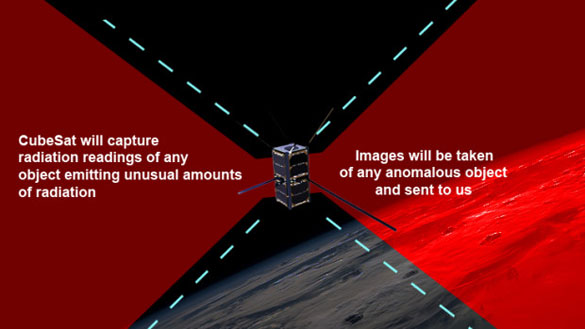 They will use two cameras with parabolic lenses in order to get a 360 degree view around the satellite, and want to add radar if the technology and the budget permits.

If you want to support the project, there are still a couple of days left to invest and get a Kickstarter reward, such as a CubeSat for Disclosure t-shirt or your very own UFO hunting CubeSat.

For more about this project, listen to the Open Minds UFO Radio show with Dave Cote, another project manager for the team.