A game maker is seeking funding for a new board game titled UFO Hunter.

The game’s creator, Mark Hanny, launched a fundraising campaign on Tuesday, September 10 utilizing the crowdfunding website Kickstarter. According to the game’s description: 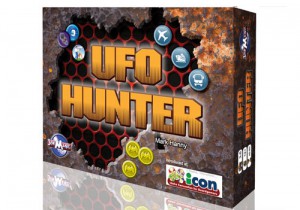 In the board game UFO Hunter, each player travels across the globe looking for tangible, extra-terrestrial evidence. In order to beat the competition to this acclaim, players must carefully choose the best time to travel, buy just the right equipment, conduct the proper research, and publish rumors of new sightings. Rumors may turn out to be nothing, or even a trap set by governments or private individuals. Even exposing hoaxes can be beneficial to leading you to the truth and ultimately to victory.

Hanny is a veteran board game designer who has designed games for more than twenty years. He describes, “I make games that I would want to play and that I myself find entertaining and challenging. I’m really in it for fun–because games should be fun. And the social aspect of board games makes each one an event. There’s nothing I enjoy more than seeing that spark of enjoyment and to have another gamer say, ‘Wow! This is really cool!'”

UFO Hunter has already been developed and designed, and is ready for production. Supporters who pledge more than a certain dollar amount will receive a copy of the game when it is produced. And according to the Kickstarter page, the game’s estimated delivery is December 2013.