Video footage of an alleged UFO in Guatape, Colombia was recently uploaded to YouTube. Sighting reports from Colombia and other countries in the northern region of South America are common, and some believe that this is due to the country’s proximity to an exit from a UFO highway.

Entrances and exits for UFO highways are apparently at various locations around the globe. Some claim the mysterious halo phenomenon that appeared over Moscow in October was actually an active UFO highway exit.

You’ve probably heard about UFO highways before, and if not referred to as a “highway,” you’ve possibly heard the terms “vortex,” “star gate,” or “wormholes.” In theory, these serve as entrances and exits to/from highways, allowing alien vessels to travel epic distances through the galaxy/galaxies. 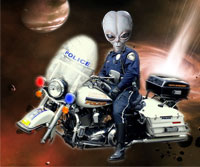 Many fascinating questions arise when applying Earth’s concept of highway travel to space navigation. Do UFO highways have speed limits? If so, how are they enforced? Photo radar? Highway patrol? Are carpool lanes available on a UFO highway? Are “Adopt-a-Highway” programs being utilized to maintain a safe and garbage-free highway on these galactic highways?

Star Trek taught me that it’s probably not a good idea to go shooting weapons inside a wormhole, so I’m sure road rage on a UFO highway gets pretty messy . . .