An Oklahoma City morning news program says they caught a UFO on video during their morning broadcast, and they are asking the public what they think it might be.

KOCO 5 News in Oklahoma City posted a short 13 second video (seen above) this morning of a strange bright object shooting across the screen. The video is from a camera mounted at the top of Grand Casino, located just east of Oklahoma City. 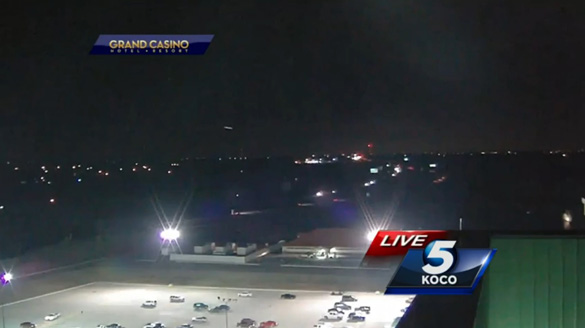 At the beginning of the 6 am news broadcast, they showed live video from the Grand Casino camera showing traffic on the nearby I-40. A bright object can be seen shooting from off camera, seemingly nearby, and moving away from the camera and to the right. It appears to be luminescent the entire time.

The broadcasters did not mention the object, nor did they appear to notice it in the broadcast. The broadcaster can be heard saying about the camera, “This is from our Grand Casino cam.” She then goes on to introduce their meteorologist.

However, KOCO posted the 13 seconds of video when the object can be seen on their website with the title, “Caught on camera: UFO flying through sky near Shawnee.”

There is no story that goes along with the video, but in the description they write: “We caught a flying object on KOCO 5 News in the Morning at 6 a.m. What’s your guess on the object shooting across the sky?”

In the comments, viewers have suggested meteors, shooting stars, aircraft, fireworks, bugs, and, of course, aliens. One viewer wrote, ” Aliens have gambling addictions too.”

No one has suggested that the video is a hoax, and that is likely a safe bet, given that the video comes from the news station itself. Recently, a video of a UFO caught on a news broadcast in Argentina got international attention. However, that video was not from the station. In fact, when the station caught wind of the UFO video being circulated, they announced that the video was a hoax and their original broadcast did not have the video in the background. 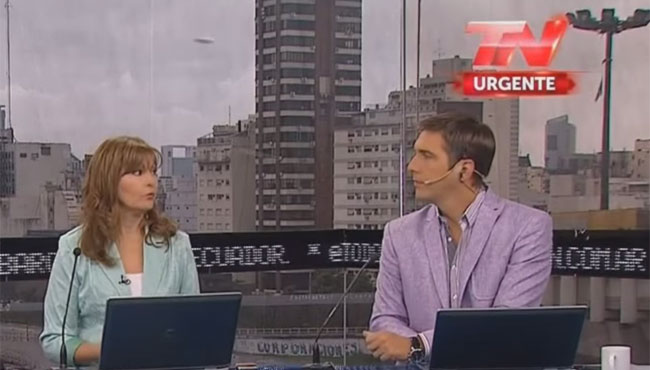 Another recent video that may shed some light on this one is a UFO video (seen below) taken from a drone in the Silicon Valley in California. The video, like the one from KOCO, shows a small bright object shoot quickly across the screen. Several researchers have expressed their belief that the object is actually an insect moving quickly near the camera and not a larger self luminescent object at a greater distance from the camera.

It could be that both objects are simply bugs. However, no doubt, as is the case with the California video, many will disagree. We will keep an eye on this story and let you know if KOCO figures out what they caught on their Grand Casino cam.

KOCO consulted two professors from Rose State College to get their opinions as to what might have flown across the screen on the Grand Casino cam. Professor Steven Fowler’s reaction was, “It’s obviously an unidentified flying object, it is a UFO.”

However, he says he doesn’t believe has anything to do with extraterrestrials. Instead, Flower and his fellow prefessor, Steve Carano, say they think it might be a small meteorite or a piece of space junk. Carano told KOCO, “These things come in, they’re glowing hot and the trajectory is too straight.”

KOCO wrote, “The professors also ruled out an optical illusion or a moving light source as the cause. Carano says it was just too fast and sharp, and no light was being diffused as it moved across the sky.”

“We don’t think this is anything intelligent, alien life,” Carano joked. “This is probably either a satellite from outer space that has burned up or more probably like a meteor that’s come on in and burned out.”