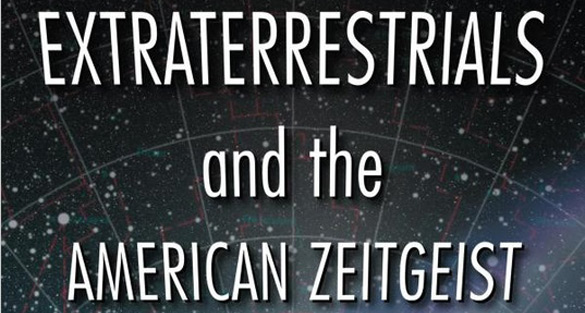 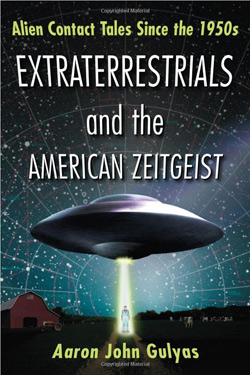 As author Ken Hollings has recently shown in his book Welcome to Mars (2014), the US in the 1950s, as opposed to our present day view of a decade defined by Eisenhower, the Cold War and Leave It to Beaver, was one of rampant experimentation: politically (the broadening of the Truman Doctrine and the nuclear arms race), sociologically (the development of the suburbs, automobile culture, and rampant consumerism) and culturally (Lenny Bruce, the Beats, free jazz, existential philosophy, the folk revival and French New Wave film, among others). These seeds would later ferment into the Cultural Revolution and Civil Rights eras of the 1960s.

By far one of the most fascinating and – according to author Aaron John Gulyas, a history professor at Flint, Michigan – subversive critiques of the schizoid nature of postwar America – one where technology alternately promises a utopian future or destroys everything – was that of the alien contactee movement, which aside from a few odd cases of physical, psychic or telepathic encounters (helpfully recounted here), began in 1952 with George Adamski’s first contact with Orthon, a benevolent “space brother” from the planet Venus.

Though Gulyas remains undecided concerning the authenticity of Adamski’s claims, it seems fairly obvious, at least since Jim Moseley’s debunking efforts of nearly 50 years ago, that Adamski, with his science fiction (his novel Pioneers of Space,from which much of his later contactee claims were derived, was published in 1949) and Theosophically-influenced occult roots (he started a movement in the 1930s named “The Royal Brotherhood of Tibet” and, as with the Theosophists’ otherworldly “masters” that have throughout history made contact with and guided humanity, Adamski’s aliens originate from planets within our solar system) seemed primed to utilize the newly-minted – and then wildly popular – flying saucer mythology as a means of disseminating his decades-old message of peace, love and interstellar brotherhood. 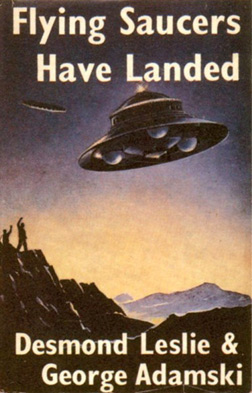 Contrasting Adamski’s benevolent, blonde-haired Orthon with Bender’s sinister Men in Black, Gulyas makes a compelling case for how contactee literature roughly approximates the dichotomous nature of that highly anomalous decade of the 1950s: an era of either utopian promise – including meetings with our advanced space brothers who will lead us into a new golden age – or dystopian nightmare. In the case of the latter, Cold War era concerns of Communist infiltration and subversiveness led to FBI investigations of US citizens, and flying saucer groups in particular. It has been speculated that the Men in Black may have been nothing more than government agents; Bender, perhaps fantasy prone or suffering from some form of paranoid delusion, imagined a routine governmental investigation into his group, the International Flying Saucer Bureau, to be a visitation from demonic, otherworldly beings.

Gulyas writes that “while the contactee phenomenon persisted through the 1970s and 1980s, the major shift in thinking was that theories of extraterrestrial visitation shifted to a much darker vision,” a vision Bender’s visitors in some ways anticipated. This vision, explains Gulyas, manifested through two main ideas: the alien abduction narrative – via the contact claims of Elizabeth Klarer (1954-1963), the abductions of Antonio Villas Boas (1957) and Betty and Barney Hill (1961), the Paul Bennewitz affair (1979-1988), Whitley Streiber’s Communion (1987), and the modern day abduction/hybrid alien claim, with its (often disturbing) sexual overtones – and the political conspiracy theory concerning governmental knowledge of crashed flying saucers and subsequent alien colonization of Earth; this was, after all, post-Kennedy assassination, post-Watergate America and governmental conspiracies became increasingly voguish. These cover-up theories, kept alive by the subsequent disclosure movement, have their roots in Frank Scully’s investigation of the crashed saucer at Aztec, New Mexico (now a largely debunked hoax) (1950), Donald Keyhoe’s speculations (1950, 1953) that the US government is engaged in a vast cover-up of alien visitation spurred by the use of nuclear warheads (in much the same way that nuclear blasts brought Earth to the attention of various Venusian and Martian beings who made contact with the likes of Adamski), Bender’s Men in Black, Adamski’s “Silence Group” (first mentioned in 1957), Frank Edwards’ best-selling books  (1966, 1967), the 1947 Roswell, New Mexico flying saucer crash as initially recounted by Charles Berlitz and William Moore (1980) and the surrounding Wright Patterson, Hangar 18 and Area 51 memes. 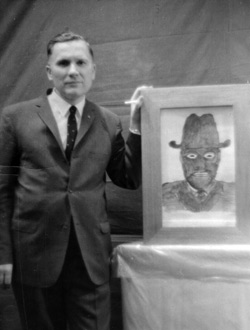 Albert Bender with a drawing of one of the Men in Black he claims to have encountered.

Much of this speculation concerning government cover-up can be traced to early saucerologist dissatisfaction with the Air Force’s explanations for the UFO phenomenon, most famously J. Allen Hynek’s “swamp gas,” and the belief that rapid advances in technology are the result of back-engineered alien machinery retrieved from various crashed saucer and/or secretive government contact made with space beings. The most sordid (and irresponsible) of theories – such as those propagated by William Cooper and John Lear in the 80s and 90s – combines government cover-up and abduction memes into one vast, overarching conspiracy theory involving aliens acting in collusion with the US government in an effort to abduct and experiment upon unsuspecting civilians, and of an ongoing interstellar warfare in which Earth has become a battlefield.

By far the most interesting – and revelatory – portions of Gulyas’ book are those chapters that trace the modern abduction and exopolitical themes of the UFO phenomenon to the contactees of the 1950s, in part because Gulyas is among the first historians to attempt to connect these contactees of the classic flying saucer era to our modern age, regarding them as similar cultural expressions. Previous studies, Gulyas argues, regard contactees as a product of Cold War hysteria or as new religious movements and have tended to ignore them as a useful means of examining subjects as diverse as “military policy, the changing organizational structure of the US government, popular culture [and]the use of media,” all of which are explored in Gulyas’ book. Indeed, Gulyas carefully traces the various sociocultural factors (such as Theosophy and science fiction, consumerism and Cold War politics) that contributed to the contactee phenomenon; certainly Richard Wise’s The Day the Earth Stood Still (1950) and Ray Palmer’s “Shaver Mystery” (1945-1949) inspired the contactees as much as any silvery objects in the sky.

Gulyas contends that the contactee movement, believed to have ended in the early 1960s around the same time that the Civil Rights and Vietnam era took hold of the public’s attention, has in fact continued to the present, though like any cultural phenomenon, its features have changed with the times. Observes Gulyas, these “storytellers exist on a parallel track to the Beats, the counterculture of the sixties, the New Age movement of the 1970s, and the ennui and paranoia of the 1980s and 1990s.” With this in mind, it seems appropriate that Bender’s sinister Men in Black, and not Adamski’s Orthon, seems to have captured the conspiratorially-minded imagination of the present, from Hollywood films (Men in Black [1997] and its two sequels) to television (The X-Files [1990-1998];the time travelers on Fringe [2008-2013] are basically a modified variation). 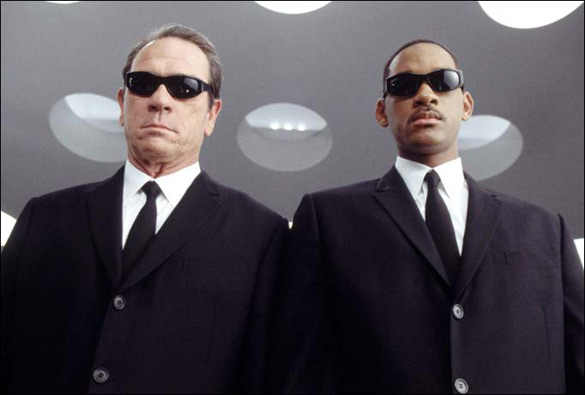 Refreshingly, Gulyas’ Extraterrestrials and the American Zeitgeist makes no claims to the truth of the contactee experience, yet instead offers a readable, jargon-free, well-researched and insightful analysis of the contactee’s cultural impact and continued relevance, charting its various manifestations intelligibly and authoritatively. It is a welcome addition to a handful of books offering a penetrative and balanced exploration of the psychological and sociological importance of the UFO phenomenon.

Extraterrestrials and the American Zeitgeist can be found on Amazon.com.