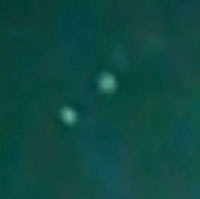 Two UFOs flying over the Western Australian town of Cooloongup were captured by a night-vision video camera on December 29.

According to the Daily Telegraph, the video shows “a bright light crossing the moon and then mysteriously breaking into two pieces – heading in different directions.” Several witnesses in other parts of Australia reported seeing similar UFOs on previous days.

The witness uploaded the video to YouTube with the following description:

Filmed in Cooloongup. One orb and another appears next to it! Filmed in the south east using a yukon Spirit Night Vision attached to a JVC Everio. Monocular was kinda out of focus a bit. To focus the whole thing I need to twist the front barrel of the scope and the back eye piece and then adjust the cameras manual focus with tele-macro.

While objects like the two that appear in this video are commonly captured with night-vision cameras, some are suggesting that this particular video is fake, because the second object appears out of nowhere.