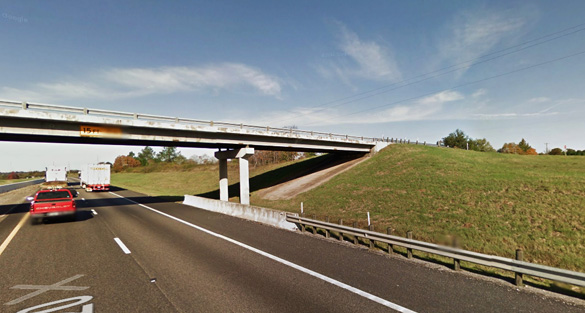 A Texas witness at Lindale reported a triangle-shaped UFO hovering over a bridge off I-20 about 10:50 p.m. on June 10, 2014, according to testimony in Case 56993 from the Mutual UFO Network (MUFON) witness reporting database.

The witness was driving home when he noticed the hovering object. 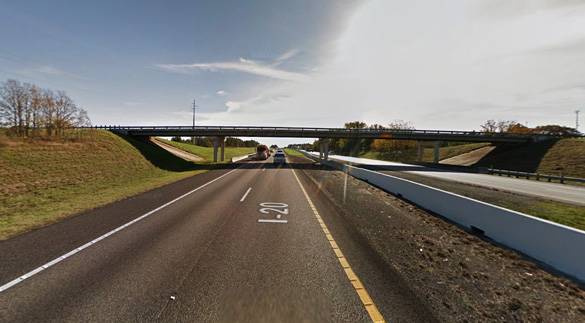 The witness noticed the triangle-shaped object hovering over a bridge just off I-20. Pictured: A bridge over I-20 in Lindale, TX. (Credit: Google)

“It would get very bright and then fade out and the light would almost disappear and then it would get bright again,” the witness stated.

“The object was a glowing yellow at first and then the closer I got the more details I could see. I witnessed the object hover and I clearly saw a triangle, almost crescent-like object hovering with yellow lights surrounding the exterior getting brighter and fading.”

Then the object began to move.

“The object hovered and then slowly descended behind a row of trees and it was out of my sight. It was like nothing I’ve ever seen before and it left me with chills and my heart racing after the incident.”

Texas investigators are also looking at a second report – Case 56970 – that occurred at 2:30 a.m. on June 4, 2014, that also occurred in Lindale involving an object hovering at the tree top level. 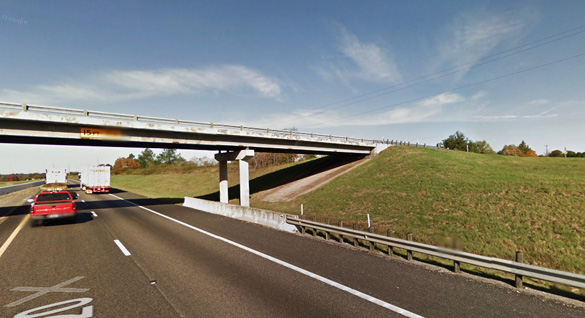 The witness was outside on a patio when she noticed a “yellow-orange light” in the sky.

“It kind of looked like it was outlined in red and moving lower in the sky,” the witness stated. “I turned my phone off because the screen was too bright and I wanted to see this light better. At first, I thought it was a star but quickly realized it wasn’t. It was maybe 100 feet in the air and descending in a sort of curved 45-degree angle moving at a slow rate of speed.”

“Once it got to the tree top it slowed almost to a stop, but looked as if it was bobbing up and down like floating on water. Then it moved to the right, and then back to the left. Then it started descending very slowly. At this point, it’s behind the tree but I can still see it. It gave me the impression that it was ‘busy’ doing something, like it was there for a purpose.”

The object then appeared to move to the ground level.

“It would hover and bob up and down and continue to descend. I watched it until it was so low that my back yard fence was in the way of me seeing it anymore. I was able to see it until it was about 8 feet off the ground. Also, where this light is hovering, there are houses right by the tree it’s behind and there was a dog barking in that area. “

The witness did not attempt to capture the object on a photo because she believed her phone would not pick up the object well.

“I can’t quit thinking about what I saw. I remember I was scared and I wanted to wake my husband up so he could see it too but he was out of town. I told him about it when he got home.” 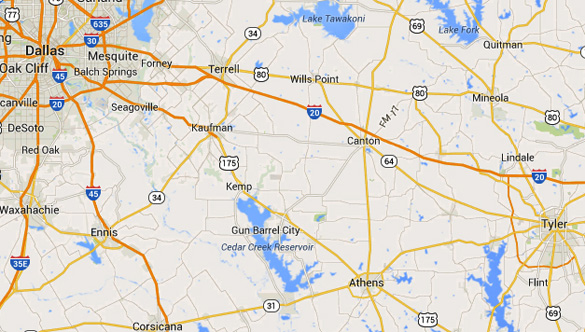 Lindale is a city in Smith County, TX, population 5,024. Texas has a current UFO Alert Rating of 3 with a high number of recent reports nationally. Texas had 30 UFO reports in May 2014 – the 4th highest reporting state – while California had 102 reports as the highest reporting state. The above quotes were edited for clarity. Please report UFO activity to MUFON.com.