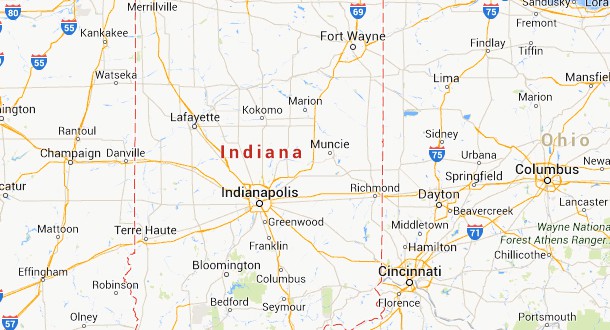 The Indiana witness did not name the town – but experienced a triangle UFO hovering near the downtown area on September 7, 2014. (Credit: Google)

An Indiana witness reported watching a triangle UFO silently hovering over a highway near a downtown area about 9:10 p.m. on September 7, 2014, according to testimony in Case 59692 from the Mutual UFO Network (MUFON) witness reporting database.

The witness – who reported the sighting on September 9, 2014 – did not name the town in the public portion of the report. She was driving in the downtown area during a thunderstorm when an object was seen approaching at a low altitude.

“It was a very large triangle and the lights on the outside seemed like they changed from green to white,” the witness stated. “There were no red lights at all on this craft.”

The witness watched the object as it moved through the area.

“Then very slowly and silently it hovered for a moment over a building near an intersection where I caught a red light. I nearly hit a parked car trying to observe it and cars coming at me seemed like they were veering to look it also.”

The witness tried to listen for any sound coming from the object.

“Then it changed direction to move southwest and even though it was storming out I tried to listen for sound by rolling down my car window and heard nothing. It moved slowly at first and then like a shot it was gone.”

The sighting was similar to another case in Maine that occurred on the same day, but an hour earlier, as reported in: Maine family drives by hovering triangle UFO.