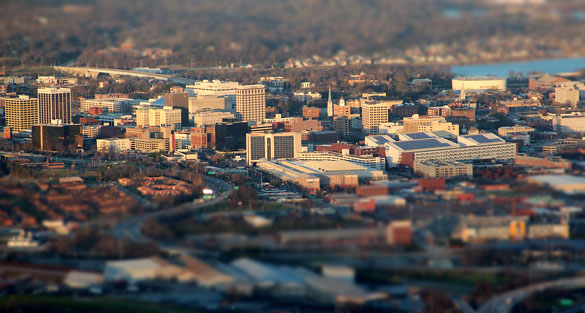 A Tennessee witness at Chattanooga reported watching a silent, triangle-shaped UFO with multiple lights hovering about 50 feet over an apartment building, according to testimony in Case 73121 from the Mutual UFO Network (MUFON) witness reporting database. 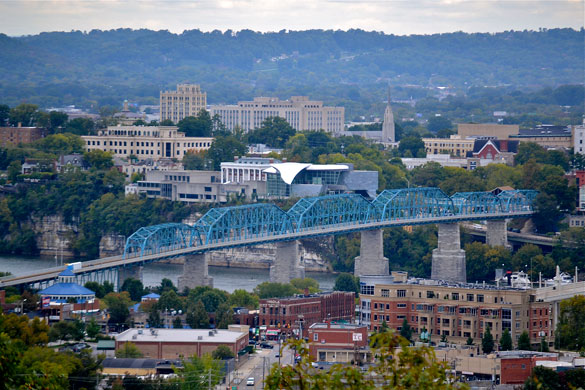 “I stopped on Highway 153 for about a minute to check for damage to my car because I had run over a piece of debris that looked like rubber from a tire off of an 18-wheeler that was in the road,” the witness stated.“I didn’t see any major damage that would prevent me from driving home, so I got back in my car, lit a cigarette and continued on my way.”

As the witness turned onto Webb Road from Highway 58, he noticed what he first thought to be an airplane.

“It had several lights. Three were brighter than the rest and one on the left side was much smaller and blinking. I thought to myself, wow that plane is really low and it was pretty far from where I generally see them as they approach the local airport.” 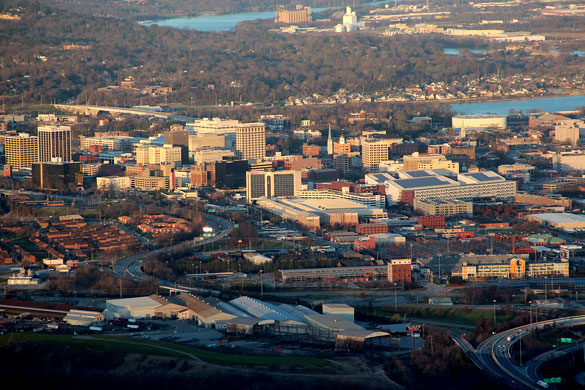 The object had three main lights that looked like headlights on a car. Pictured: Downtown Chattanooga, TN. (Credit: Wikimedia Commons)

As the witness continued to drive towards, he realized it wasn’t moving.

“So I thought it must be a group of three helicopters. I thought this for a moment because helicopters are the only things I know of that hover like this or move slow enough to appear to be hovering. Also there were three main lights pointing straight out almost like headlights on a car. And having lived on and around a military base for about five years,I know they sometimes fly in a V-formation of three. However, I quickly dismissed this idea because there were three lights on either side of the central light that were dimmer.”

As the witness drove closer, he saw that the lights were not independent of each other and that maybe they had put up a new cell tower on Highway 58 and it just appeared to be above the apartments.

“But as I got even closer I slowed down because I realized it was a solid black triangle that connected the lights and it was hovering just below the tree line about 50 feet above one of the apartment buildings. I saw there was no pole or anything else keeping it up. It was just sitting there.”

“The three main lights looked straight ahead like headlights on a car and you could see the mist swirling through the light. The smaller lights on either side were more like ambient light than headlights. By this I mean the type of light you would see given off from a window as you drove past a house at night. The blinking light was even smaller than the secondary lights but appeared to be the same intensity. All the light was pure white in color.” 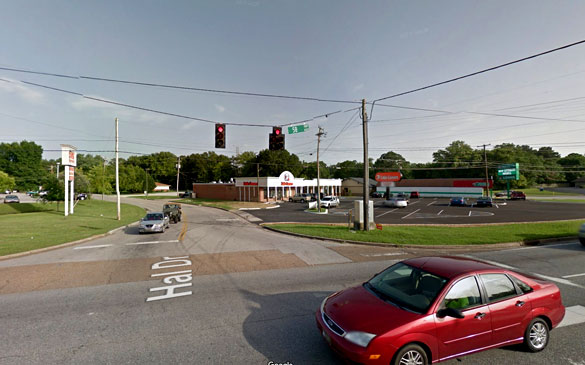 The witness saw the UFO as he turned onto Webb Road from Highway 38, pictured. (Credit: Google)

The witness described an unusual characteristic of the object.

“The object itself was black, but not black like the way we color things black. It was the definition of black. A total absence of color. It was almost like what I would imagine looking into a black hole would be like. There were lights on in the parking lot of the apartments but they were not reflected on the craft and did not light it up. It was as though it absorbed the light.”

Then the witness drove by the object with it on the passenger side of the vehicle, but he could see that the object was a little less than one story high and triangle-shaped.

“And about one-third the size of the apartment unit it was hovering over. I also didn’t hear any noise coming from it. My window was down on the driver side because I smoke. It was below the treeline, but again about 50 feet above the apartments.”

The witness wanted to slow down, but another vehicle was approaching from behind. He eventually lost sight of the object and decided to drive home and check on his children.

“I have gone past there several times since and there is absolutely nothing in the parking lot or that can be seen from that road that could possibly explain what I saw.”

Chattanooga is the fourth-largest city in the U.S. state of Tennessee, with a population of 167,674. Please remember that most UFO sightings can be explained as something natural or man-made. The above quotes were edited for clarity. Please report UFO activity to MUFON.com.